This Uprising Is About More Than Knives 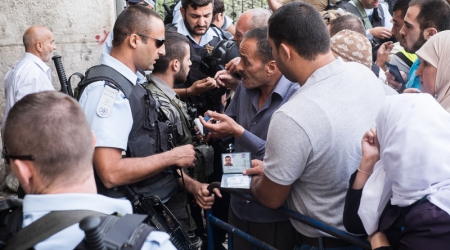 When the “intifada of the knives” set off in October, last year, Western reporters flooded into Jerusalem to cover the new “escalation,” to interview people from “both sides of the conflict”, and to raise several variations of the old question: “Is this the beginning of a third intifada?”Inevitably, the journalists left, once a massive crackdown significantly reduced the number of deadly attacks against Israelis in the city. It is an all too familiar pattern for Palestinians, who know, by now, that it’s only an “escalation” when there are dead or wounded Israelis. Deaths, injuries, arrests and home demolitions inflicted on Palestinians, by Israel, are deemed business as usual, not worthy of further inquiry. The daily acts of collective punishment suffered by Palestinians in Jerusalem, and their slow ethnic cleansing, are too routine to be considered newsworthy.

The temporary checkpoints, closures and concrete blocks imposed during the crackdown may have gone, and the numbers of Israeli troops on the streets may have been reduced. Yet, the Israeli repression — and Palestinian resistance — remains.

One of Israel’s most troubling tactics is its withholding of the bodies of slain Palestinians.

In mid-October, the Israeli security cabinet endorsed several measures to quell the unrest. One involved reviving a decades-long policy of withholding the bodies of Palestinians accused of carrying out attacks.
Since then, more than 80 bodies have been withheld. Israel began gradually releasing the bodies in late December, after weeks of mass protests, most notably in Hebron, but the bodies of 10 Palestinian Jerusalemites remain in Israeli morgues.

Exploiting the geographic and political isolation of Palestinians in Jerusalem, Israel has attached repressive conditions to the release of the bodies. Their families must bury them on the opposite side of the wall Israel has built around the city, limit the number of mourners present at burial, bury the dead only at certain late hours, and pay a surety in lieu of those conditions.

“We are being deprived of our right to mourn, and Israel is using the dead bodies of our children to break us,” Alayan told The Electronic Intifada. “Yet the issue is not receiving a fraction of the coverage and attention it deserves.”

The 60-year-old lawyer believes that the families of Jerusalem’s martyrs have been completely abandoned by the Palestinian Authority. He struggles to understand the apathy of the Western media.
None of the Western journalists who had approached him following his son’s killing, to ask why such a bright young man should carry out a knife attack, have bothered to come back and ask about Bahaa’s body, Muhammad said.

Had they done so, they would have found the Alayans sleeping in a makeshift tent next to the rubble of their house. The Alayan home is one of several demolished by Israel in retaliation for individual attacks. The policy of punitive home demolitions was also contained in the package of measures approved by Israel’s security cabinet in October, and has been endorsed by Israel’s high court.

The policies to withhold bodies of alleged attackers and demolish their families’ homes constitute some of the most egregious human rights violations against Palestinians in Jerusalem. But, they have also pushed the community to mobilize.

On 1 December, youth held a concert at the Palestinian National Theatre — also known as El-Hakawati — in support of parents with children in prison and those waiting for the release of their children’s bodies. The theater’s largest hall was filled to capacity; revenues were allocated to home reconstruction.

The communal solidarity, organized by residents in Jerusalem’s Shuafat refugee camp following the destruction of Ibrahim Akari’s home, was replicated throughout the West Bank, notably in Ramallah and Nablus.

There has been direct action, too. Inspired by Bahaa Alayan’s idea of forming a human chain, back in March of 2014, Palestinians did just that on 26 December. The chain encircled the walls of Jerusalem’s Old City, with participants demanding the return of martyrs’ bodies before the peaceful protest was violently dispersed by Israeli forces.

Mobilizing mass protests, in the face of Israel’s extreme repression, has become even harder for Palestinians in Jerusalem, since October. Israel has deliberately targeted leading activists in the city by jailing them, putting them under house arrest, threatening arrest, or handing down orders to expel them from the city.

These measures did not stop Hijazi Abu Sbeih and Samer Abu Eisheh from setting up a protest tent in the yard of the International Committee of the Red Cross building, in Jerusalem’s Sheikh Jarrah neighborhood. While the tent was initially erected to provide the two with shelter, when they rejected Israel’s order to banish them from Jerusalem, it was soon transformed into a vibrant space of civil disobedience.

For nearly two weeks, the tent brimmed with energy and revolutionary spirit, free of factional divisions. Concerts were held there, along with public lectures and discussions.

More than providing support for the two protesters, those who attended were imbued with a rare sense of genuine, if short-lived, freedom. Here, they were able to sing, raise their voices against Israeli oppression, chant “I am not leaving,” immerse themselves in debate, and organize.

Palestinians are often asked about an alternative to their corrupt and failed leadership. Those who visited the tent could get a glimpse of what that could be like.

On 6 January, both Abu Eisheh and Abu Sbeih were arrested by special Israeli police units, on the Red Cross premises. The two have been charged with defying military orders and inciting violence via Facebook, Abu Eisheh’s lawyer, Mahmoud Hassan, told The Electronic Intifada.

The protest tent, and Israel’s arrest raid there, did not capture the attention of international journalists, even though these nonviolent forms of resistance and Israel’s crackdown on them are at the heart of Jerusalem’s story.

One cannot yet speak of an organized mass movement among Palestinians. But, this current uprising has much more to it than knife attacks waged by individuals. And, Israel’s repression goes far beyond bullets and checkpoints.