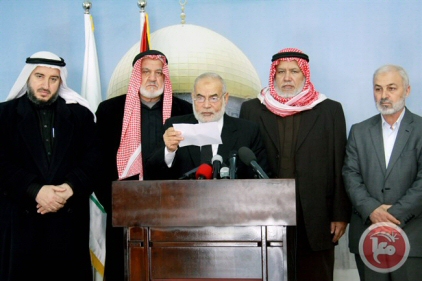 A senior Hamas official, on Tuesday, announced details of the latest initiative for national reconciliation between rival Palestinian movements Fateh and Hamas.Ahmad Bahr, a member of Hamas and deputy speaker for the Palestinian parliament, the Palestinian Legislative Council (PLC), said during a press conference in Gaza City that the initiative hoped to establish a national unity government composed of all Palestinian factions.

He said, according to Ma’an, that as soon as this government was formed, it was hoped the PLC would convene, in what would be its first session since 2007.

Bahr said the initiative would also agree on dates for legislative, presidential, and national council elections across the occupied Palestinian territory, and would work toward new elections for the Palestinian National Council (PNC), the PLO’s legislative body.

He called on Fateh and Hamas to meet their ‘historical, national, and humanitarian responsibilities’ to reunite Palestinians, and applauded the upcoming meeting between the two movements in Doha, this week.

The meeting, currently scheduled for February 6, was announced by Hamas official Ismail Radwan on Saturday, and is the latest in a series of attempts to reconcile the two movements since their falling out in 2007.

Palestinian leadership has repeatedly failed to follow through on promises of reconciliation and the holding of long-overdue elections. Both movements have frequently blamed each other over these failures.

Also of interest: 10/15/15 Read Their Lips: Israeli Leaders’ Plans for the Palestinians