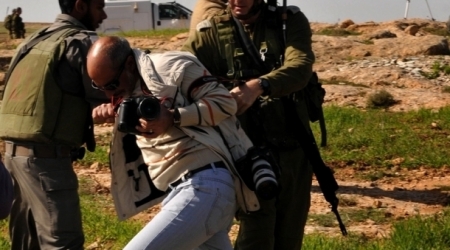 The Government Media Office in Gaza has documented 51 Israeli violations committed against Palestinian journalists, during the month of January, 2016.In its monthly report on Israeli violations against Palestinian journalists, the GMO explained, according to Al Ray, that the Israeli occupation has committed 338 violations since the beginning of the popular uprising, last October. These violations were varied to include detentions and extensions, field attacks, the banning of media coverage, summons to interrogation, and house raids.

The report listed the violations as follows:

On 1 Jan., Facebook management was prompted to block a page belonging to the undersecretary of the GMO, Ihab al-Qusian, for one week, under the pretext of posting pictures of Mohammed Addief.

On 6 Jan., a deterioration occurred in the health condition of Muhammad al-Qeeq, who has been on hunger strike since last November, in protest of his administrative detention.

On 7 Jan., a number of Palestinian journalists suffocated with tear gas fired by Israeli forces during the covering of clashes between soldiers and Palestinians in Sa’er town, to the north of Hebron.

On 10 Jan., Facebook management was prompted to close the page of the cartoonist Ummaia Juha, after drawing pictures about Mohammed al-Qeeq.

On 11 Jan., Israeli forces stormed the house of Palestinian journalist Musab Attameemi, in Hebron, and served him with a summons to appear before interrogation.

On 14 Jan., the Israeli Prison Service extended the detention of journalist Mujahed Assadee for another eight days, for interrogation. Israeli forces detained journalist Mohammed Matar at al-Karama crossing for several hours. They also banned the holding of a press conference at the Commodore Hotel, in occupied Jerusalem.

On 15 Jan., occupation police attacked the press conference of the Supreme Committee of Arab Mass and other humanitarian organizations in Jerusalem. Israeli forces shot journalist Safeya Omar, 27, during the covering of clashes between Israeli forces and Palestinians at the entrance of the Bethlehem; a number of Palestinian journalists were injured, in addition.

On 17 Jan., Israeli forces stormed the Palestinian National Theater and banned the holding of a meeting on the reality of the cultural landscape of Jerusalem, and prospects for its development, in the light of attempts to distort the Arab identity of the city.

On 21 Jan., the Israeli military court of Jalam prison extended the detention of Mujahed Assaedee for the second time.

On 22 Jan., the European Institute Against Incitement published the names of ten journalists, for publishing Israeli crimes.

On 24 Jan., Israeli intelligence services accused Palestine TV and other media sources of incitement to commit attacks against Israelis.

On 27 Jan., and Israeli court banned the presence of al-Qeeq before the court because of his deteriorated health conditions and loss of his ability to speak. The supreme court again refused the appeal to release al-Qeeq, after sentencing him to six more months of administrative detention.

On 28 Jan., Israeli Prison Services extended the detention of Mujahed Assaedi for eight days, for the third time.

On 29 Jan., Ofer military court refused the appeal of the lawyer of the journalist Ali al-Eweeai, 26, against his administrative detention.

On 31 Jan., Israeli forces detained journalist Mahmoud al-Qawasmee, an anchor in Hebron Radio, after storming his house and searching it.