Soldiers Kidnap A Palestinian In Jenin, Search Homes And Property 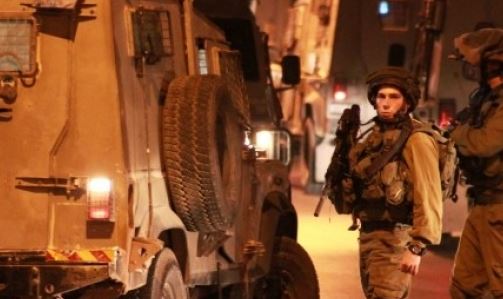 Several armored Israeli military vehicles invaded, on Wednesday at dawn, the northern West Bank district of Jenin, stormed and ransacked homes, and kidnapped one Palestinian.Media sources in Jenin said the soldiers invaded the home of Hashem an-Nathour, in the Jenin refugee camp, and violently searched it, looking for his son, Sa’id, who was not at home during the invasion.

The soldiers smashed doors and property in the invaded home, and interrogated the family.

In addition, the soldiers kidnapped a Palestinian teenager, identified as Mahmoud Khalil Sa’adi, 18, after storming his family’s home; the soldiers also interrogated the teen and his family.

They installed a roadblock, on the main road linking between Jenin and Um at-Tout, before stopping and searching many cars.