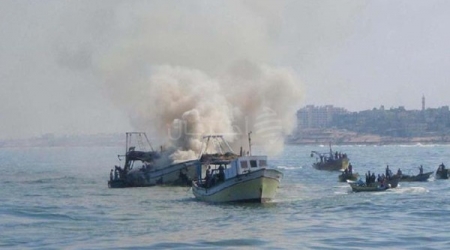 The Israeli navy took into custody four Palestinian fishermen off the Gaza coast and seized their boats, Wednesday morning, while the army invaded the area to the east of Khan Younis, southern Gaza Strip.Captain Nezar Ayyash reported that soldiers opened fire towards two Palestinian boats and, then, detained four fishermen who were aboard.

He stated that the fishermen are of Assaedee family, and that all of them, along with their boats, weretaken to an Israeli seaport nearby.

Meanwhile, Israeli bulldozers penetrated the border with Gaza to the east of al-Fukharee town,southeast of Khan Younis.