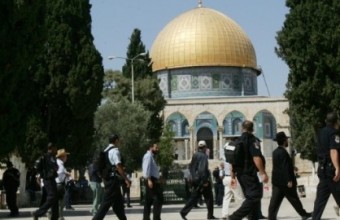 Jewish Israeli settlers, on Wednesday, resumed provocative tours inside al-Aqsa Mosque compound in Jerusalem, provoking tension with Palestinian worshipers, who chanted religious slogans to protest their entry, according to witnesses.An Islamic Waqf guard told WAFA that, during the early morning hours, around 130 settlers, accompanied by armed Israeli policemen and intelligence officers, broke into the holy site and performed rituals there, whilst, at the same time, dozens of Muslim worshipers were denied entry into the site by police who set up checkpoints at the gates leading to the compound.

Since early October 2015, tension has been running high throughout the West Bank, including Jerusalem and Gaza, against the backdrop of Israel’s repeated assaults on the mosque, including its unilateral enforcement of a temporal division between Muslims and Jews.

Prior to the unrest in October, the Euro Mediterranean Human Rights Monitor pointed out, in a report, that Israeli incitement and violations against Arabs in Jerusalem have increased dramatically in 2015.

Since the beginning of unrest in early October 2015, some 165 Palestinians have been killed and over 16,000 others injured with Israeli forces’ live ammunition or rubber-coated steel rounds.

Israel seized east Jerusalem, where Al-Aqsa is located, in the 1967 Six Day War, and later annexed it in a move never recognized by the international community.’

Also of interest: 2015: A Dangerous Escalation at Al-Aqsa Mosque