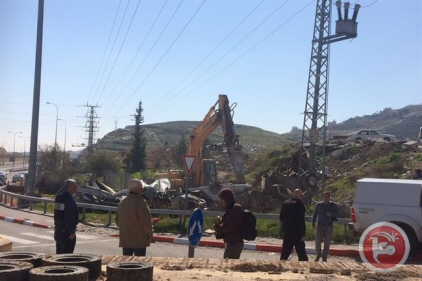 Israeli bulldozers, on Wednesday morning, demolished a garage in the village of al-al-Isawiyya, occupied East Jerusalem.Haitham Mustafa said, according to Ma’an News Agency, that Israeli forces entered the village from its eastern entrance and bulldozed a 400 square meter car-repair garage belonging to him. He said that Israeli forces told him the garage was unlicensed, adding that they had not allowed him to remove his equipment or cars under repair from the garage, before they destroyed it.

Additionally, Israeli forces had not given him any prior notice before demolishing the garage — which he said had provided the sole income for two families.

The head of a local popular committee, Muhammad Abu al-Hummus, said that the garage was built on land that is threatened with confiscation by the Israeli authorities for an Israeli national park.

Abu al-Hummus added that Jerusalem municipality officials escorted by Israeli forces had entered the village from its main entrance, and toured its streets on Tuesday.

He said that Israeli forces also raided the village on Monday, and delivered seven demolition notices for housing structures that had been built between four and ten years, previously.