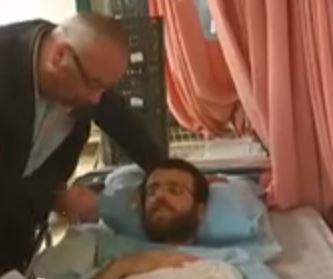 A video published, Thursday, revealed that hunger striking detainee, journalist Mohammad al-Qeeq, who started his strike 72 days ago, became barely able to speak or hear, lost a significant amount of weight, and is in a rapidly declining health condition. The video, filmed during a visit by Arab Member of Knesset Osama Saadi, showed al-Qeeq unable to even utter a few words, yet, saying his strike continues as long as he is held under arbitrary Administrative Detention, without charges or trial.

Al-Qeeq was responding to an Israeli court decision to keep him held under Administrative Detention, without presenting any indictment against him, a decision solely based on the allegation of a “secret file,” — a file neither the detainee, nor his lawyer, have access to.

‘The second phase has not started yet; nobody should ever think it is over,’ al-Qeeq stated, ‘I still have a long road ahead, and I will continue this path.’

Commenting on the court’s decision regarding ending his strike, without releasing him, al-Qeeq said; ‘They are trying to fool the world; however, I am ongoing with my strike for freedom; this strike will only end when am a free man in the West Bank.’

His statement about being a free man in the West Bank is meant to send a message that has no intention to accept any deal that would lead to his release in return for being forced into exile, or sent to Gaza, instead of returning home in Ramallah.

Al-Qeeq works for the al-Majd TV, an Islamic channel in Saudi Arabia, and was repeatedly arrested and imprisoned by Israel and the Palestinian security forces.

His latest arrest was carried out by the Israeli army on November 11, 2015, after the soldiers invaded his home.

His wife, Faiha’, who is also a journalist, said the soldiers surrounded their home, smashed several windows and doors, and violently searched the property before confiscating his mobile phone and computer.