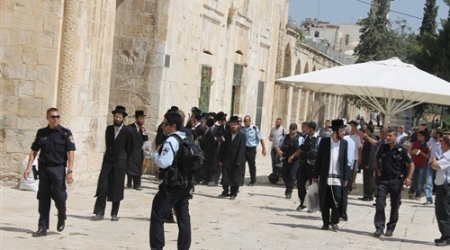 Israeli settlers stormed the courtyards of Al-Aqsa Mosque on Thursday morning, from Mughrabi Gate, guarded by special occupation forces.Jerusalemite sources said, according to Al Ray Palestinian Media Agency, that the settlers carried out provocative tours inside the courtyards of the holy site, amid the presence of Palestinian worshipers.

Extremist settlers and politicians have repeatedly violated the sanctity of Al-Aqsa Mosque on an almost daily basis, and always under the protection of armed occupation forces, which often attack Palestinian worshipers who try to protect their place of worship.

New from Al Ray: Gazans Suffer, and the World Looks Away