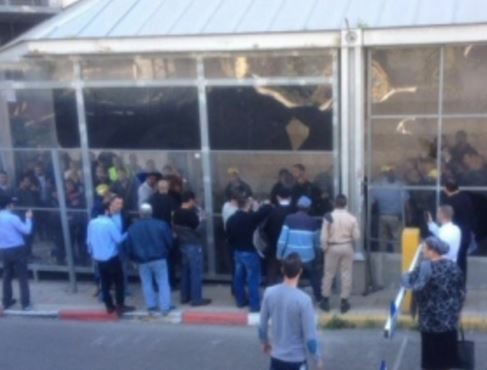 Two Palestinian girls were detained, after allegedly attempting to attack an Israeli security guard at a bus station in the central Israeli city of Ramla, on Thursday.An Israeli police spokesperson identified the two girls as 13-year-olds from the al-Jawarish area of Ramla.

‘The two arrived at the central bus station in Ramle, when the security guard asked them to identify themselves before going into search machine, they stabbed him,’ they said, adding that one of the teens was carrying a school bag.

Another police spokesperson said that a security guard was ‘lightly’ injured, according to Ma’an News Agency.

A photo was shared, on social media, of two kitchen knives scattered amongst school papers at the scene of the incident. The knives appeared to be clean, with no signs of blood.

While reports of Palestinian attacks against Israelis have surged, since a wave of unrest began in October, the vast majority of reports have surfaced from the occupied West Bank and East Jerusalem.

The incident comes one day after three Palestinian youth were shot dead in front of East Jerusalem’s Damascus gate, following a fatal attack on a 19-year-old Israeli Border Police officer. Another was seriously inured.

On Sunday, a Palestinian Authority police officer was shot dead after he opened fire on Israeli soldiers stationed at an Israeli military checkpoint near the Beit El settlement, north of Ramallah, in the West Bank, injuring three soldiers.

This attack came just after a 17-year-old Israeli was stabbed and injured, in Jerusalem’s Old City, on Saturday. Israeli police reported that a 16-year-old Palestinian from an East Jerusalem neighborhood later turned himself in, claiming responsibility for the attack.

Rights groups question the legitimacy of many reports, while efforts by the international community to quell recent violence and return Israeli and Palestinian leadership to negotiations have, so far, failed.

In the video below, an Israeli soldier is clearly seen (1:30) to toss a knife at a young Palestinian woman, demanding that she retrieve it from the ground, thus forcing her to visibly take on the role of a terrorism suspect.

Ban condemned the series of violent attacks carried out by Palestinians in recent months, but said that Israeli security measures were failing to ‘address the profound sense of alienation and despair driving some Palestinians — especially young people.’