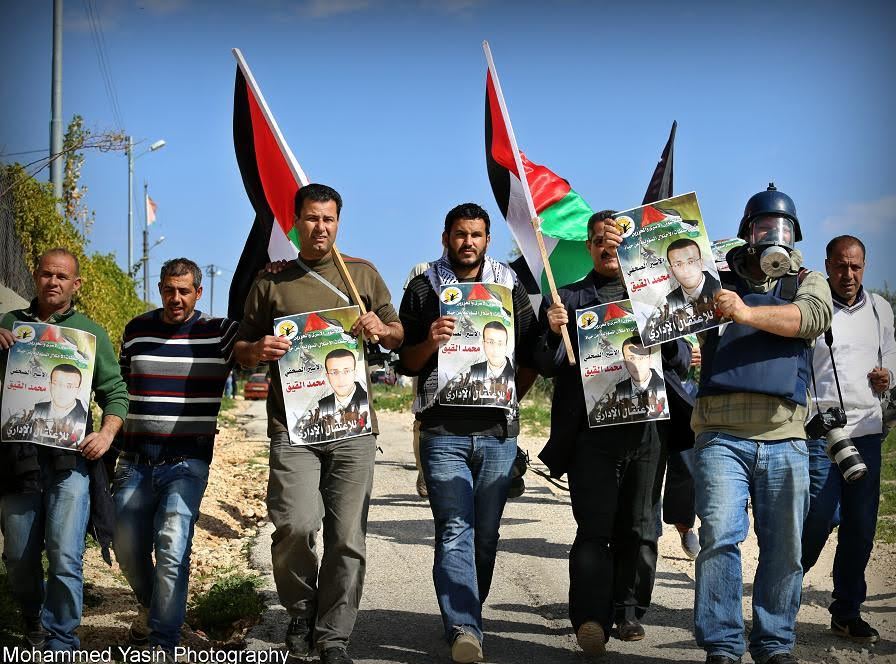 Israeli soldiers used excessive force, Friday, against the weekly nonviolent protest against the Annexation Wall and colonies, in Bil’in village, near the central West Bank city of Ramallah.The protest started following noon prayers, when locals, along with Israeli and international peace activists, marched from the center of the village towards the villagers orchards, in the western part of the village.

The protesters carried Palestinian flags, and pictures of hunger striking detainee Mohammad al-Qeeq — who is in a near-death situation — demanding his release, and the release of all political prisoners.

The soldiers instantly resorted to force, started chasing the protesters in the street and orchards, and fired dozens of gas bombs and rubber-coated steel bullets.

Coordinator of the Popular Committee against the Wall, Abdullah Abu Rahma, denounced the Israeli escalation, and the nightly invasions into the village, especially Thursday’s demolitions in the village, and said these violations as illegal acts of collective punishment.

He added the Israeli occupation is constantly trying to end the protests, that started eleven years ago, and are ongoing and gaining more support, locally and internationally.

Abu Rahma also said that such Israeli military escalation, and all sorts of collective punishment, will only push the Palestinians to remain steadfast and continue their legitimate struggle for liberation and independence.