Families Remain Isolated In A Surrounded Building in Qabatia 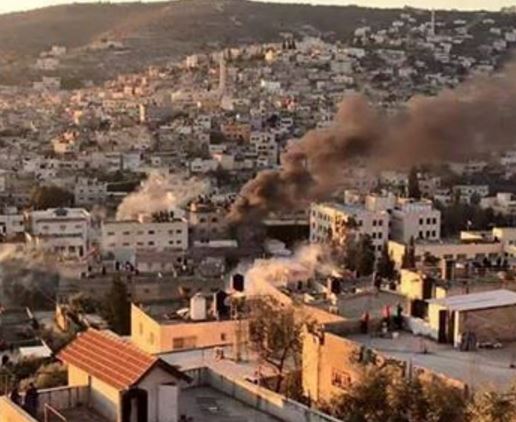 For the second consecutive day, families living in a residential building in Qabatia town, near the northern West Bank city of Jenin, remain isolated, running out of food and water, after the soldiers surrounded the building and occupied its rooftop. The building is inhabited by eight families, and is located near the Central Market, at the northern entrance of the town; its residents are not allowed to leave, and the army also destroyed the water network.

The inhabitants are the families of Mohammad Badran, Majdi Nazzal, Rezeq Alawna, Adham Tazaz’a, Mohammad Asasa, and Mohammad al-Johari, with a total of 35 Palestinians, including 23 children, and are running out of basic food supplies and water.

On Thursday, medics evacuated a pregnant woman from the building and took her to a hospital after she suffered severe effects of tear gas inhalation. The army initially refused to allow her to leave but the families, and medics, remained persistent.

They voiced an appeal to the Red Cross and various human rights groups to intervene, and save the lives of the families, especially due to the large number of children.

Qabatia has been the target of a massive Israeli military invasion following the Wednesday deadly shooting attack in Jerusalem, that led to the death of an Israeli policewomen, identified as Hadar Cohen, 19, and three Palestinians who carried the attack out.