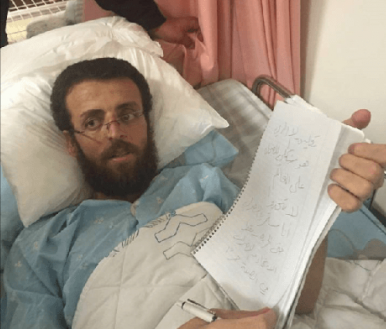 On Thursday, Palestinian journalist Mohammad al-Qeeq said he rejected the Israeli court decision to temporarily suspend his administrative detention (indefinite jailing without charge or trial), and that he would continue with his hunger strike.The Israeli Supreme Court, according to the PNN, suspended his six-month administrative detention sentence citing medical concerns, with the sentence to be resumed upon an improvement of his health.

Due to al-Qeeq’s extreme bad health situation, he could not say what he wanted, so he wrote down his wishes regarding the Israeli court decision, emphasizing the continuity of his hunger strike until he is completely free, not accepting any temporary decision.

“The decision of the administrative suspension is configurable a laugh at the world. I continue to strike until freedom, and freedom only”, he wrote.

He also emphasized his refusal to receive any medical treatment unless he is transferred to a Palestinian hospital.

And so, his hunger-strike, which was started on November 24th of 2015, came as a protest against administrative detention in Israeli prisons for six months without any charges or court.

The detention period can also be endlessly renewed every six months.

Al-Qeeq’s wife said, Friday, that her husband’s health had continued to deteriorate and he was no longer responsive to visitors.

Fayhaa Shalash, a journalist herself, told Ma’an News Agency that al-Qeeq’s health had shown a decline since Thursday, when she said he had still been responsive.

Shalash expressed her concerns as al-Qeeq entered his 73rd day on hunger strike, in protest of his administrative detention.

Dozens of Palestinians, meanwhile, performed Friday prayers in front of the International Committee of the Red Cross (ICRC) office in Gaza City in support of al-Qeeq.

Sheikh Wael al-Zarad called for the release of the prisoner and demanded that journalistic and international rights institutions intervene for al-Qeeq’s release.

Alongside the Palestinian leadership and other international groups, ICRC has called on Israel ‘to find a solution that will avoid any loss of life’, in al-Qeeq’s case, but the calls have yet to pressure Israel to release the journalist.