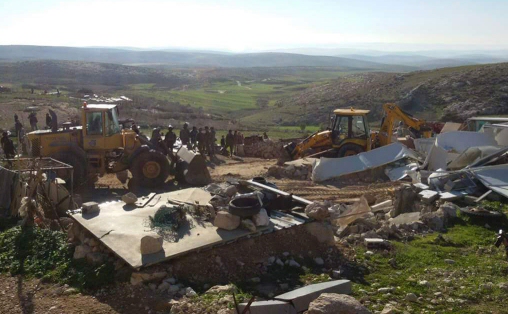 Israeli forces have continued to commit crimes, inflicting civilian casualties. They have also continued to use excessive force against Palestinian civilians participating in peaceful protests in the West Bank and Gaza Strip, the majority of whom were youngsters. Occupied East Jerusalem witnessed similar attacks. During the reporting period, Israeli forces killed 5 Palestinian civilians in the West Bank, 3 of whom were killed in occupied East Jerusalem in one incident. Moreover, they wounded 10 civilians, including an Israeli human rights activist and 2 children. Six civilians, including a child were wounded in the Gaza Strip while the remaining others were wounded in the West Bank. Concerning the nature of injuries, 12 civilians were hit with live bullets, 11 others were hit with rubber-coated metal bullets and one was hit with a sound bomb to the face.

In the West Bank, Israeli forces killed 5 Palestinian civilians and wounded 14 others, including a child and an Israeli human rights activist. Nine of them were hit with live bullets, 4 others were hit with rubber-coated metal bullets and one was hit with a sound bomb to the face.

During the reporting period, Israeli forces conducted at least 81 military incursions into Palestinian communities in the West Bank and 10 ones in occupied East Jerusalem and its suburbs. During these incursions, Israeli forces arrested at least 101 Palestinian civilians, including 24 children. Thirty-five of them, including 15 children, were arrested in East Jerusalem.

In the Gaza Strip, on 03 February 2016, Israeli forces conducted a limited incursion in the southern Gaza Strip. They moved about 100 meters to the east of al-Fokhari village, east of Khan Yunis, south of the Gaza Strip. Then then levelled lands for few hours and withdrew later.

In the context of house demolitions and demolition notices issued on grounds of non-licensing construction works, on 02 February 2016, vehicles belonging to the Israeli municipality demolished a house belonging to Eyad Abu Mahameed in Hommos valley in Sour Baher village, south of occupied East Jerusalem, under the pretext that he did not obtain a building permit in advance from the Israeli municipality. It should be noted that the aforementioned person should have moved in on the abovementioned day.

On the same day, on 29 January 2016, vehicles belonging to the Israeli municipality demolished a house belonging to Yehya Mohsen in Silwan village, south of the Old City under the pretext of not obtaining a building permit. It should be noted that Yehya was planning to move in soon.

On 29 January 2016, an Israeli large force raided al-Quds (Abu Dees) University, east of occupied Jerusalem. They raided the rooms of the student unions after detaining the security officers. They then damaged the rooms’ contents and confiscated a number of PC sets.

On 01 February 2016, Israeli forces demolished 3 shelters made of cloth, tin plates and wood and a livestock barn in Ein Ayoub area in Deir Ammar village, northwest of Ramallah, rending 17 members, including 11 children, homeless. These shelters belong to the families of brothers Sayyah, Abdullah and Ahmed Mousa Jahaleen.

In the Same context, on Tuesday, 01 February 2016, settlers opened fire towards a house belonging to Mohammed Abu Zaid, from Deir Estya village, northwest of Salfit. It should be noted that the house is located on the outskirts of the village and is surrounded with a number of settlements and settlement outposts.

5. PCHR calls upon the High Contracting Parties to the Geneva Conventions to fulfil their obligation to ensure the application of the Conventions, including extending the scope of their jurisdiction in order to prosecute suspected war criminals, regardless of the nationality of the perpetrator and the place of a crime, to pave the way for prosecuting suspected Israeli war criminals and end the longstanding impunity they have enjoyed;

13. PCHR calls upon the European Union to activate Article 2 of the EU-Israel Association Agreement, which provides that both sides must respect human rights as a precondition for economic cooperation between the EU states and Israel, and the EU must not ignore Israeli violations and crimes against Palestinian civilians.