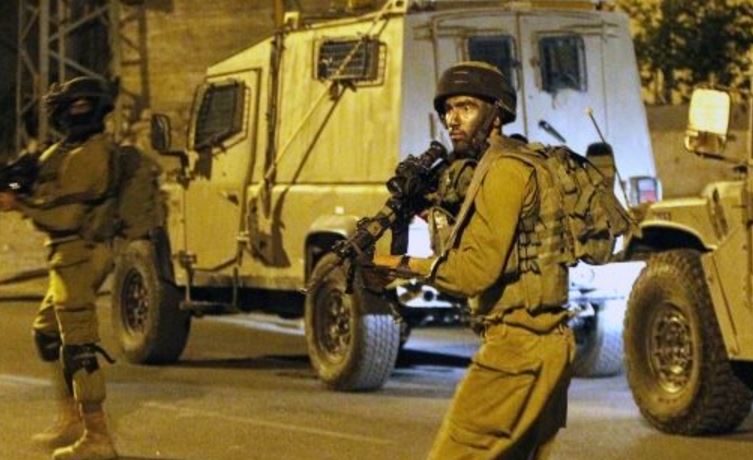 Israeli soldiers kidnapped, on Friday evening, three Palestinians, and injured several others, south of the northern West Bank city of Jenin. One of the kidnapped Palestinians was also shot and injured prior to his abduction.The soldiers invaded a gas station in Mothallath ash-Shuhada village, south of Jenin, and kidnapped Hamza Sayel Jarrar, 24, after shooting him in the abdomen, in addition to Motasem Mohammad Barbour, 20, and Ramez al-Asmar; all from Jenin.

The soldiers also shot two young men and a child with live rounds, and several others with rubber-coated steel bullets, while many residents suffered the effects of tear gas inhalation, during clashes that took place after the army invaded the village.

Head of the Emergency Unit of the Red Crescent Society in Jenin Mahmoud Sa’adi, said the two young men and the child were shot in their legs, and were moved to a local hospital, and that six other Palestinians were shot with rubber-coated steel bullets.

Meanwhile in Nablus, Israeli forces raided the town of Beit Furik and abducted Mahmoud Bassam al-Hajj, 20, and Qusay Younis Hanini, 27. Security sources said, according to Ma’an News Agency, that the forces broke into the home of Hanini, as well as that of Yasser al-Antarim.

In Beit Ur al-Tahta village, near Ramallah, locals said that Jihad Muhammad Khader Suleiman was taken when Israeli forces raided the village before dawn.

In related news, Israeli soldiers invaded ‘Aneen village, west of Jenin, broke into and searched a home, belonging to Rami Khader, and used its rooftop as a monitoring tower.

Related: Families Remain Isolated In A Surrounded Building in Qabatia