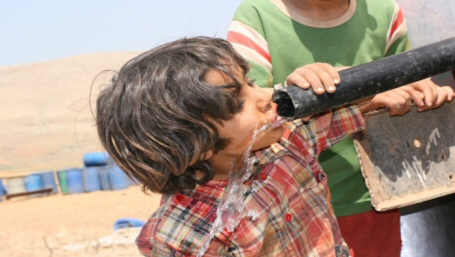 The report explains that, since the Oslo Accords introduced a discriminatory water regime in the West Bank, Palestinians’ access to water has only diminished.

According to Thirsting for Justice:

Palestinians have currently access to less water per capital than they used to have in 1995… in 2015, the average domestic consumption rate among Palestinians in the West Bank was approximately 40 liters per capita per day (l/c/d), well below the minimum 100 l/c/d recommended by the World Health Organization. In Gaza, the daily average consumption lies at 79 l/c/d. However, most of this water (96%) is contaminated with nitrates and chloride and thus unsafe for drinking.

In 2015, Israel demolished or confiscated 39 Palestinian owned water and sanitation structures in the West Bank. Israel even demolished water structures provided to Palestinians by the European Union.

Moreover, as a consequence of Israel’s assault on Gaza in 2014, 100,000 Gazans remain disconnected from the water network and 23% of Gazans are disconnected from a sewage network. Israel perpetuates Gazan’s lack of access to water by enforcing the blockade; Israel bans essential materials for water and wastewater projects from entering the border.

To learn more about the status of Palestinians’ access to water and ways to advocate for it read Thirsting for Justice’s full newsletter on Palestinians Right to Water in 2015.