Army Runs over Boy in Clashes with Students 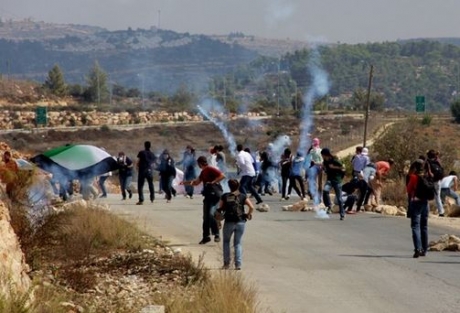 A 12-year-old student, on Sunday, was deliberately run over by an Israeli military jeep, during clashes that erupted with demonstrating students at the entrance of al-‘Arroub Refugee Camp, to the north of Hebron, according to a local activist.The students were reportedly taking part in a student rally that kicked off toward the home of a local teenager, who was fatally shot by Israeli army on Wednesday, to attend his funeral.

Local Omar Yousif Jawabreh, 16, was fatally shot by armed soldiers during clashes that took place in the camp on Wednesday.

Coordinator of the anti settlement and wall committee in northern Hebron, Mohammed Awad, informed WAFA that Israeli soldiers manning a checkpoint at the entrance of the camp, reportedly clashed with students and attempted to deliberately run over a number of them, before running over a 12-year-old boy.