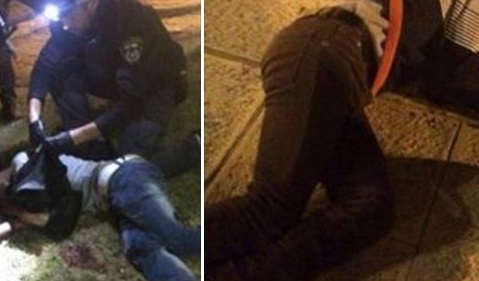 Palestinian eyewitnesses said the exchange of fire took place at the main road leading to the New Gate of Jerusalem’s Old City, just a few meters away from Bab al-‘Amoud.

Following the shooting, the Israeli army closed the entire area, and declared it a closed military zone, while the soldiers conducted large-scale searches.

The Israeli police said the two Palestinians carried automatic rifles, and fired on officers of the Border Guards Units. They have not been identified at the time of this report.

It added that several explosive experts also rushed to the scene, and initiated searches in the area.

Israeli daily Haaretz said the two Palestinians carried homemade “Carl Gustav” rifles, and opened fire on officers and soldiers, after approaching them, before police shot them dead; the army and police reported no injuries.

The first of the slain was identified as Omar Mohammad Amro, who was a member of the National Security Forces in Hebron.

The second is Mansour Yasser Shawamra.

Earlier Sunday, the soldiers and police intensified their siege and military deployment in Bab al-‘Amoud area, and all roads leading to the Al-Aqsa Mosque, as the Chief of the Israeli Police, Roni al-Sheikh, toured in the area.

The soldiers placed sand hills and iron bars, closing the entire area to the Palestinians from early-morning hours until evening.

The death of the two Palestinians brings the number of slain Palestinians, this Sunday, to five, including three Palestinians, who were killed in Bethlehem and Jenin, in addition to an 18-year-old Palestinian woman, Kilzar Mohammad al-Oweiwi, who was killed, Saturday, after the soldiers shot her three times, including one bullet that passed through her lung and lodged in her neck.