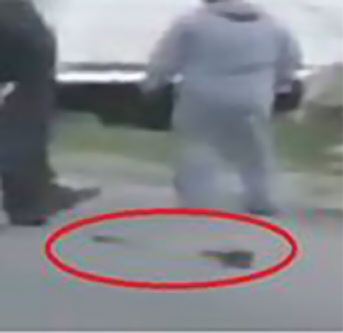 A Facebook *hasbara (propaganda) group has posted, on their page, a video which has apparently been edited in order to convince viewers to believe that a disabled man’s crutch is a firearm, as he is violently thrown from his wheelchair by an Israeli soldier.The group, called ‘The Palestinian lie’, posted the video below on February 15th, with the following subtext:

The video was posted on Facebook, in response to footage and accompanying news, which surfaced yesterday, February 14th:

Though the original footage is slightly murky, one can plainly see, upon replay, that the the two dark objects circled in the doctored footage are, in fact, falling in tandem and make up the top and bottom pieces of an axillary crutch.

*Israeli news outlet +972 defines ‘hasbara’ as a form of propaganda aimed at an international audience, primarily, but not exclusively, in western countries. It is meant to influence the conversation in a way that positively portrays Israeli political moves and policies, including actions undertaken by Israel in the past. Hasbara efforts also often include a negative portrayal of the Arabs and especially of Palestinians.