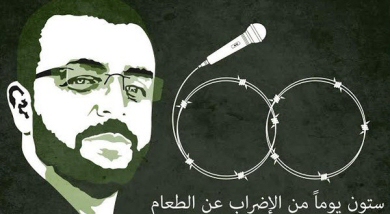 The health of Palestinian prisoner Mohammad al-Qeeq has deteriorated further, one of his lawyers said Monday, as the imprisoned journalist entered his 83rd day on hunger strike.Hanan al-Khatib, a lawyer with the Palestinian Authority Committee for Prisoners’ Affairs, said in a statement, according to Ma’an, that al-Qeeq was suffering sharp pain in his chest, numbness in his face, and had begun ‘shouting loudly, and screaming: ‘Let me hear my son’s voice, please God.’

She said: ‘I have not seen him like that during the whole period of his strike. The situation is painful, saddening, and very critical.’

Khatib said the latest deterioration in his health was ‘unprecedented.’ She said a medical team had gone to HaEmek Hospital in Afula, where al-Qeeq is being held, but the journalist refused to be touched or treated.

Al-Qeeq, a 33-year-old Palestinian journalist and father of two, began his hunger strike in November, in protest of his administrative detention by Israel — internment without trial or charge which can be renewed ever six months.

Earlier this month, the Israeli Supreme Court ruled to temporarily suspend his administrative detention sentence due to his poor health, but said the sentence would be resumed once his health improved.
Al-Qeeq rejected the ruling, saying he would not end his hunger strike unless Israel agreed to his full release.

The Palestinian Prisoners Society has repeatedly said Israel was ‘not showing attention or willingness’ to solve al-Qeeq’s case.

Israel has negotiated in cases of hunger strikes launched by Palestinian prisoners in the past out of fear that prisoners’ deaths could spark unrest in the occupied Palestinian territory, but the territory has already faced turmoil for months.

The head of the Palestinian Prisoners Society, Qadura Fares, said earlier this month that the Israeli security establishment now believes it has ‘nothing to lose’ by letting al-Qiq die.