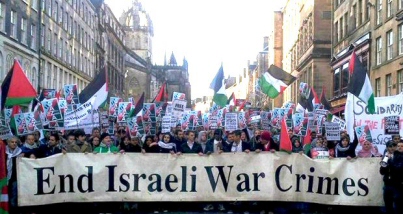 PLO Executive Committee Members Dr. Hanan Ashrawi and Dr. Saeb Erekat (Secretary General), met in separate meetings with the British Minister for Middle East Affairs, Tobias Ellwood, after which Dr. Ashrawi and Dr. Erekat released the following joint statement:’We are seriously concerned at the new British ‘guidance’ that would entail the banning of any kind of ethical procurement by local governments, public bodies and any organization that receives public funding, including some student unions.

In practical terms this means that such bodies are forbidden from exercising their democratic right and freedom of choice not to be complicit in the Israeli settlement project and to take a positive, moral and legal stand in the face of such a war crime.

This represents a serious regression in British policy and it would empower the Israeli occupation by sending a message of impunity. In order to accommodate the Israeli occupation, the British Government is undermining British democracy and their own people’s rights. Such a law would have prevented British citizens from taking peaceful actions against the South African Apartheid. Such a law also contradicts international responsibility and even the UK’s own practice when it comes to entities violating human rights.

Only last week, the Israeli Human Rights Organization Peace Now released a study detailing the Israeli government’s escalation of settlement activities at an unprecedented rate. They found that only in 2015 construction was initiated in at least 1,800 settlement units.

It is no longer acceptable for any government to claim support for the two-state solution while granting immunity to Israeli crimes and systematic violations of international law and UN resolutions. Those who claim to seek the two-state solution should hold Israel accountable for deliberately destroying the prospects of peace and should work on ending the Israeli occupation rather than rewarding it.

Next year signals the 100th anniversary of the Balfour Declaration, a tragedy that continues to victimize the Palestinian people, both under occupation and in exile. The United Kingdom bears the primary responsibility for such a historical injustice in Palestine. It is called upon to begin the process of rectification and redemption rather than to insist on perpetuating the injustice.

We strongly urge the British government to reconsider its positions and to rescind this regulation. This is not only a matter of law or politics, but also of moral responsibility.’