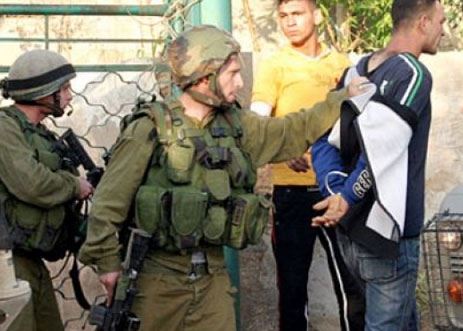 Israeli soldiers have kidnapped, on Thursday, at least four Palestinians in different parts of the occupied West Bank. The army searched many homes, and summoned a child for interrogation in Bethlehem. Media sources in the northern West Bank city of Tulkarem, said several Israeli army vehicles invaded Ezbet Shoufa village, south of Tulkarem, invaded and searched a few homes, and kidnapped one Palestinian.

The kidnapped resident has been identified as Ahmad Hassan Reehan, 32; the soldiers detonated his home’s front door, and searched the property, before kidnapping him.

In addition, the soldiers invaded Nahhalin village, west of the West Bank district of Bethlehem, and kidnapped Mohammad Ali Najajra, 20, after searching his home.

Several military vehicles also invaded the Deheishe refugee camp, in Bethlehem, and summoned a child, identified as Mahmoud Ahmad al-Moghrabi, 12 years of age, for interrogation in the Etzion military base.

The child is the son of detainee Ahmad al-Moghrabi, who has been held by Israel for more than ten years, while his mother, Hanadi, was only released from Israeli detention on Wednesday.

In addition, the soldiers invaded Doura town, south of the southern West Bank city of Hebron, searched homes and kidnapped Luay Bassel Shadeed, 18, before moving him to an unknown destination.

In Hebron city, the soldiers kidnapped Enas Mohammad al-Ja’bari, 19, after stopping her in Hebron’s Old City; the army claims the soldiers searched her and located a knife in her bag. She was moved to an interrogation city.