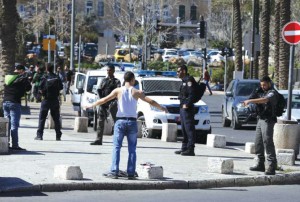 In the West Bank, Israeli forces killed 6 Palestinian civilians, including 3 children and a young woman, and wounded 46 others, including 11 children. Forty-three of them were hit with live bullets and 3 others were hit with rubber-coated metal bullets. Among the wounded were 42 civilians, who were wounded during an Israeli incursion into al-Am’ari refugee camp in al-Bireh, in the central West Bank, to carry out arrests.

Killings committed by Israeli forces in the West Bank were as follows:

On 13 February 2016, Israeli forces deployed in al-Sahlah Street in the centre of Hebron shot and killed Kalzar al-Ewaiwe (18) after she stabbed an Israeli soldier at the military checkpoint near the Shari’a Court.

On the same day, Israeli forces guarding the annexation wall, west of Jenin, killed Nehad Waked (16) and Fo’ad Waked (16), from al-Arqah village, west of Jenin. Israeli forces claimed that the two children had opened fire from a homemade automatic gun at a military vehicle guarding the wall. The Israeli media published a photo of a homemade machine gun, which was a simulation of an M16, claiming that it belonged to the 2 children.

On 14 February 2016, Israeli police officers opened fire at Mansour al-Shawamrah (20) and Omer Amr (20), both from al-Qbaiba village, northwest of occupied Jerusalem, while being present in front of the walls of the Old City, near the light rail, under the pretext of an alleged shooting at Israeli soldiers. As a result, both of them were killed with several bullets throughout their bodies. It should be noted that they were officers at the Palestinian National Security Service.

On the same day, Israeli forces stationed at “Mazmouria” checkpoint that was erected at the entrance to “HarHoma” settlement between Jerusalem and Bethlehem, opened fire at Na’im Ahmed Safi (17), from al-Ebeidiya village, east of Bethlehem, under the pretext of an alleged stabbing against an Israeli soldier at the checkpoint. As a result, Safi was shot and killed with several bullets.

11 agricultural facilities in al-Eisawiya village, northeast of the city, were demolished. Israeli forces issued notices for the demolition of dozens of houses in al-Eizariya village.

During the reporting period, Israeli forces conducted at least 81 military incursions into Palestinian communities in the West Bank and 7 ones in occupied East Jerusalem and its suburbs. During these incursions, Israeli forces abducted at least 76 Palestinian civilians, including 19 children. Twenty-one of them, including 14 children, were abducted in East Jerusalem and its suburbs.

In the Gaza Strip, Israeli forces wounded 10 Palestinian civilians, including 2 children; 9 of whom were wounded during a protest along the border fence, east of al-Shaja’iya neighbourhood, east of Gaza City. In addition, a civilian was wounded during a protest near the annexation wall, east of al-Bureij refugee camp, in the central Gaza Strip. Three of them were hit with live bullets, 6 others were hit with rubber-coated metal bullets and one was hit by a tear gas canister to the face.

In the Gaza Strip, on 17 February 2016, Israeli forces conducted a limited incursion in the east of al-Bureij refugee camp, in the central Gaza Strip. They levelled lands along the fence and re-deployed in al-Salqa Valley, east of Deir al-Balah.

In the same context, on 11 February 2016, Israeli forces abducted 4 Palestinian civilians, including 3 children, while attempting to sneak into Israel through the border fence, southeast of al-Bureij refugee camp, in the central Gaza Strip, to look for work. They were released on the next day.

Israeli settlement activities continued in the West Bank. 35 dwellings, 41 livestock barns and 26 structures attached to them in Nablus and Tubas were demolished. 22 families consisting of 164 individuals, including 105 children, were rendered homeless.

Israeli forces have continued to commit crimes, inflicting civilian casualties. They have also continued to use excessive force against Palestinian civilians participating in peaceful protests in the West Bank and Gaza Strip, the majority of whom were youngsters. Occupied East Jerusalem witnessed similar attacks. During the reporting period, Israeli forces killed 6 Palestinian civilians, including 3 children and a young woman, in the West Bank, 2 of whom were killed in occupied Jerusalem. In addition, they wounded 56 civilians, including 13 children and a woman; 46 of whom, including 11 children and a woman, were in the West Bank and 10, including 2 children, were in the Gaza Strip. Concerning the nature of injuries, 46 civilians were hit with live bullets, 9 were hit with rubber-coated metal bullets and a civilian was hit with a tear gas canister right to the face.

Israeli forces continued their weekly assaults on non-violent demonstrations in various parts of the West Bank this week.

Following the Friday prayer, on 12 February 2016, dozens of Palestinian civilians gathered in the centre of Ni’lin village, west of Ramallah, to organize a peaceful demonstration in the protest at the annexation wall and Israeli settlement activities. The protesters made their way into the village streets and then headed to the annexation wall. When the protesters attempted to cross the land behind the wall, Israeli forces prevented them, due to which, the protesters threw stones at them. Israeli forces fired live bullets, tear gas canisters, sound bombs and rubber-coated metal bullets at the protesters in response. As a result, a 16-year-old male was hit with a rubber-coated metal bullet to the head and was then taken to Palestine Medical Complex in Ramallah.

Following the Friday prayer, dozens of Palestinian civilians and Israeli and international human rights defenders organized a protest in Bil’in village, west of Ramallah; al-Nabi Saleh village, northwest of the city; and Kufor Qaddoum village, northeast of Qalqiliya. Israeli forces used force to disperse the protesters by firing live bullets, rubber-coated metal bullets, tear gas canisters and sound bombs at them. As a result, many civilians suffered teas gas inhalation and others sustained bruises as Israeli soldiers beat them up

Due to the number and severity of Israeli human rights violations this week, the PCHR made several recommendations to the international community. Among these were a recommendation that all States that apply the principle of universal jurisdiction should not surrender to Israeli pressure to limit universal jurisdiction to perpetuate the impunity enjoyed by suspected Israeli war criminals.

In addition, the PCHR calls upon the international community to act in order to stop all Israeli settlement expansion activities in the Occupied Palestinian Territories through imposing sanctions on Israeli settlements and criminalizing trading with them.