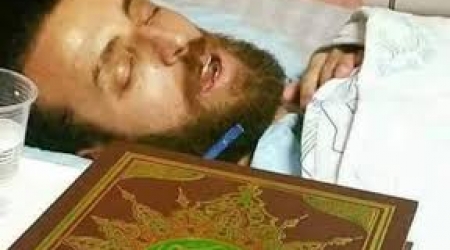 Hunger striking journalist Mohammad al-Qeeq, after suffering severe convulsions on Wednesday night, lost the ability to breath, hear, see or speak until the morning.Mohammad Kana’na, who accompanied al-Qeeq in the hospital, said that the administrative detainee suffered from severe convulsions which could not be controlled.

He explained that al-Qeeq was hardly able to speak, is in a very serious condition, and that the only thing which could be done for him was to wash his hands and keep him hydrated.

Al-Qeeq is still refusing any medical tests except for the examination of the heart beat, according to Al Ray.

The Israeli high court refused, yesterday, to move al-Qeeq from Afula hospital to a Palestinian hospital in Ramallah.

Meanwhile, the head of the Arab Committee, Mohammed Barakah, said that the solidarity wave of support for al-Qeeq has tightened, describing him as a symbol.