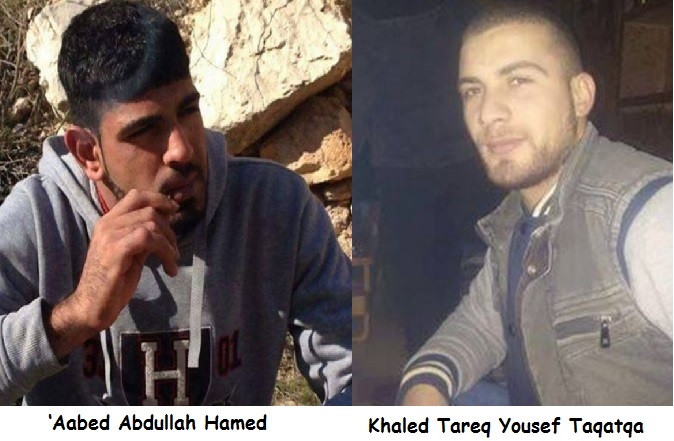 Israeli soldiers killed, on Friday, a young Palestinian man, in Beit Fajjar town, in the West Bank district of Bethlehem, after several Israeli military vehicles invaded it. The army also killed a young man in Silwad town, east of Ramallah.The Palestinian Health Ministry has reported that the soldiers shot and seriously injured, Khaled Tareq Yousef Taqatqa, 21, before moving him to Hadassah Medical Center in Jerusalem, where he died of his serious wounds.

Red Crescent medics said the young man was left bleeding on the ground, and that the soldiers prevented them from approaching him, before an Israeli ambulance arrived later at the scene and moved him to Hadassah, but he had already lost a lot of blood, especially since he was denied life-saving medical treatment.

Two Palestinians were also shot with live rounds, one in his arm and the other in his leg, near the northern entrance of Bethlehem city, and many others suffered the effects of tear gas inhalation.

Hours after his death, the Israeli side transferred the Hamed’s body to a military roadblock near Beit El settlement, where a Palestinian ambulance was waiting and moved him to the Palestine Medical Center, in Ramallah.

The soldiers first shot Khalaf with two live rounds, followed by dozens of shots after he was already injured and bleeding on the ground. The shooting was captured on video as Al-Jazeera crew was filming a documentary in Bab al-’Amoud.

The Health Ministry said the latest deaths bring the number of Palestinian, killed by Israeli fire since October 1, 2015, more than 180, including 49 children, and several women.

In related news, at least seven Palestinians were shot and injured, after Israeli soldiers, stationed across the border fence, attacked Palestinian protesters, near various border areas in the besieged Gaza Strip.

The Health Ministry in Gaza said four Palestinians were shot in the northern part of the Gaza Strip; three of them with live rounds and one with a rubber-coated steel bullet, and three others were shot in the Sheja’eyya neighborhood, east of Gaza City.