Video: “Abu Khalaf Was Executed After Soldiers Had Already Incapacitated Him” 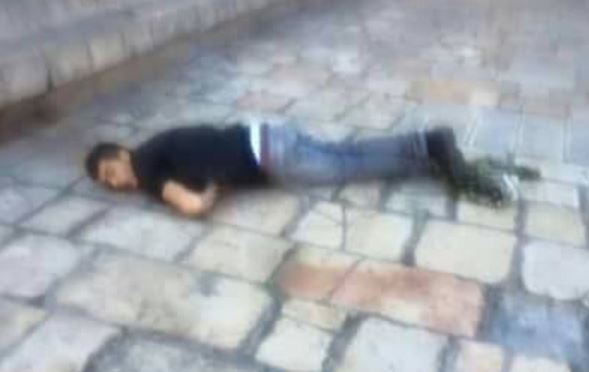 The Qatar-based Al-Jazeera crew in occupied Jerusalem said they witnessed Friday’s fatal shooting of a young Palestinian man, who was first shot with two live rounds, followed by dozens more shots after he was already injured and bleeding on the ground.The Al-Jazeera crew said the Palestinian stood behind some Israeli border police and tried to stab one of them, in Bab al-‘Amoud in Jerusalem, before the soldiers shot him with two rounds.

The Palestinian, Mohammad Abu Khalaf, 20 years of age, fell onto the ground bleeding and incapacitated, when six of the militarized police officers fired more than 50 rounds at him, killing him instantly.

The soldiers then assaulted the journalists and forced them out of the area, before declaring it a closed military zone.

“The scene was terrifying, we barely escaped with our lives,” Al-Jazeera anchor Elias Karram said, “The soldiers fired so many live rounds at this young man, they could have killed us all, every person who was there was in direct danger.”

He added that he and his team were in Bab al-‘Amoud before the shooting, as they were filming a report for Al-Jazeera, and just as they finished the report, they witnessed the stabbing attempt, and the deadly shooting that followed. The Israeli border police said two of its soldiers were mildly wounded in the reported attack.

“What happened was the execution of the young man,” Karram stated, “The border police officers lined-up and opened fire although they could have easily arrested the man, especially since he was already injured.”