Israel to Demolish Homes of Teens in Killed in Qabatia 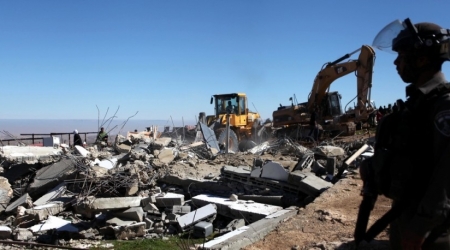 Israeli forces, Wednesday, handed the families of three Palestinian teenagers, who were recently killed by Israeli troops, notices of their intent to demolish their homes, located in Qabatia town, south of Jenin, according to security sources.Forces broke into the homes of Ahmad Naji Zakarneh, Tawfiq Abur-Rob, and Ahmad Najeh Abur-Rob, and notified their families about their intention to demolish the homes of their families on February 29 as a collective punishment against them.

The three were shot dead by Israeli police in Jerusalem, on February 3, after allegedly carrying out a stabbing and gunfire attack which killed one Israeli policeman.

Meanwhile, the army detained at least one Palestinian in the town. He was identified as Taqwfiq Zakarneh, 20.

The town has been blockaded by the Israeli army for three consecutive days, following the army’s fatal shooting of a Palestinian teenager from the town, according to WAFA. Israel claimed the teenager, Qusai Abur-rub, had attempted to attack Israeli soldiers near Beta junction, to the south Nablus, before he was gunned down.

This is the second time in less than a month Israel blockades Qabatia. On February 6th, the Israeli army lifted its three-day blockade of the town, imposed in the aftermath of the stabbing and gunfire attack in Jerusalem, on February 3.

B’Tselem, an Israeli human rights group, says: “The people who bear the brunt of the [punitive] demolitions are relatives – including women, the elderly, and children – whom Israel does not suspect of involvement in any offense.”

“In the vast majority of cases, the person whose actions prompted the demolition was not even living in the house at the time of the demolition,” adds the group.

It concluded: “Since this constitutes deliberate harm to innocents, it is clear that even if house demolition had the desired deterrent effect, it would, nevertheless, remain unlawful.”