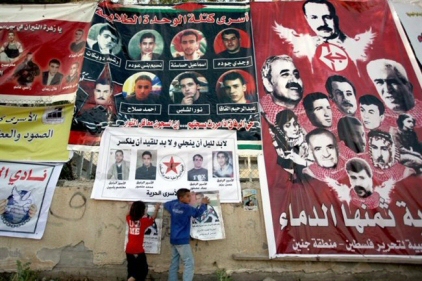 A joint investigation launched by Israeli rights groups, into practices in Israel’s Shikma prison, has revealed — once again — that ‘systemic’ violations are taking place against Palestinian detainees.Representatives of B’Tselem and HaMoked reported, in a Tuesday press hearing, that routine abuse and torture of Palestinian prisoners in Shikma’s interrogation center in the southern city of Ashkelon.

Affidavits and witness accounts documented by the Israeli rights groups showed that nearly all of 119 Palestinians interrogated at the facility experienced either physical violence, sleep deprivation, threats, or solitary confinement, with a number of detainees subjected to a combination of degrading treatments.
Other abuses included exposure to extreme temperatures or being bound to a chair by hand and foot, while 77 percent of detainees were prevented from seeing a lawyer for all or some of their time in Shikma.

The higher-ups in Israel’s military, meanwhile, turned a blind eye to abuse by Israeli soldiers or police of detainees en route to Shikma, and Israeli military judges “effectively sanctioned” the continuation of abusive measures after Palestinians were detained.

Citing the actors involved at all stages of interrogation and detention at Shikma, the groups said: “They are all party, in one form or another, to various aspects of the cruel, inhuman, degrading and abusive treatment to which Palestinian detainees are subjected at the Shikma facility and elsewhere.”

Israel’s use of the PA to carry out torture

Included in the stratum of actors who facilitated cruel and degrading measures against Palestinian detainees in Shikma prison were interrogators from the Palestinian Authority.

Of those sampled, 39 detainees were interrogated by the PA prior to their detention by Israeli forces.
Adi Awawdeh, a 21-year-old student from the occupied West Bank town of Karmah, was one of them.
“I was detained by the PA for about 70 days,” Awawdeh said in his affidavit collected by HaMoked and B’Tselem.

“With the Preventive [Security Force] there was physical and mental torture. I suffered a lot. I was in solitary confinement for 40 days, with endless interrogation. Then they put me into what we call the refrigerator — a small room about 90 cm wide and two meters long.

“They put you in there barefoot, with very thin clothes, and keep up a current of very cold air. You feel like you’re in a refrigerator. The walls and floor were very cold. You sit there with nothing but a bottle of water. There’s no toilet. … I was there for three days,” Awawdeh said.

“The interrogators hit me with their hands all over my body. Two held me down and the rest hit me. They threatened me with sexual assault but didn’t follow through on it.

“You can’t stay silent. You’ll tell them whatever they want just to be done and get out of there. That’s why I told them what they wanted and not the truth.

He went on: “In the end, I was released [from PA custody] with a fine and restrictions, and told that the Jews would yet come and get me. A week later, the Israelis arrested me.”

Awawdeh was one of 26 detainees to report the use of PA interrogation records by Israeli interrogators, 14 of whom said they were tortured by the PA during interrogations.

B’Tselem and HaMoked said by using such reports, Israeli interrogation authorities indirectly participated in torture by “knowingly using information obtained through use of torture — usually cruel and severe — by Palestinian Authority interrogators against the self-same detainees.”

‘No willingness to tackle systemic problems’

B’Tselem and HaMoked’s findings in Shikma prison have been reported in Israeli prisons across the board. While facilitated by the state, the groups said state organizations repeatedly refuse to acknowledge the existence of the systemic abuse of Palestinian detainees.

Noga Kadman of B’Tselem said at Tuesday’s briefing it was crucial to recognize that cases of torture or mistreatment are generally misrepresented by Israeli authorities as isolated incidents.

Such cases are often disregarded as “individual interrogators” who were pressured to use such tactics in “ticking bomb cases,” Kadman said.

“That’s terminology that we hear very often, that it was some sort of desperate situation,” Kadman added.

However, Kadman said torture and abuse are the “routine” measures orchestrated by Shin Bet, and backed by every other state body that comes into contact with such cases.

“One of the consistent things that you will see … is the fact that this is an orchestrated regime. It’s not some sort of individual initiative by an individual jailer, warden, or interrogator,” B’Tselem spokesperson Sarit Michaeli added. “The approval to use these kind of ‘special interrogation measures’ comes from the Attorney General, or higher-ups in the hierarchy.”

Daniel Shenhar, a lawyer for Hamoked who has aided Palestinians in taking countless of the above violations to court, said military investigations into the violations are ultimately useless.

“We’ve written the Attorney General’s office, addressing systemic sleep deprivation — which is common in almost every interrogation — about the strange five legged chairs that […] make it almost impossible to bear an interrogation. Unfortunately this door was shut in our face.

“There seems to be no willingness to tackle systemic problems by the Israeli authorities.”