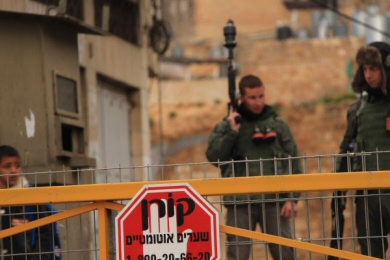 It has become a regular occurrence for Palestinian school children to endure physical violence, harassment, body searches and other demoralizing acts at the hands of the Israeli military.

For those attending school near the notorious Salaymeh checkpoint in Hebron, on Tuesday, the 23rd of February, only nine days after Yasmin al-Zarour was gunned down there, it was to be yet another school morning filled with excessive force, as Israeli soldiers quickly resorted to stun grenades to control an eight year old Palestinian child. This excessive force experienced daily, by the children of Palestine, is yet another cruel and inhumane illustration of Israel’s current apartheid regime.

As Palestinian school children shuffled through the Salaymeh checkpoint, Israeli forces carefully watched over them as if they were a serious security threat. The slow and broken process of queuing in the cold, taking off belts and other items whilst searching bags and bodies is a painful one to watch. In the only act of defiance that an eight year old can show, one Palestinian boy returns from beyond the checkpoint to throw stones at the soldiers. In many countries, such behaviour might be met with serious talks between the child’s parents and authorities. But not in occupied Palestine. Here in Palestine, Israeli forces regularly respond with tear gas, rubber coated steel bullets and stun grenades to stone throwing children.

Today was no different. Israeli soldiers gathered, staring through the scopes of their assault rifles, in order to intimidate and keep a forceful eye over the children. Soon after, a stun grenade is thrown by the occupied forces down the busy street. The stun grenade is off target and smashes a Palestinian car window before exploding. The distress is clear on the faces of innocent bystanders and school children as many flee and one young boy attempts to turn back through the checkpoint in fear.

”It was beyond unnecessary. To see a stun grenade being used to control an unarmed eight year old is disgusting. And who will pay for the poor Palestinians car damage? Not Israel. They are never held accountable no matter how minor or great the crime.”

For many, the rain would be enough to take the day off, but, for eager kinds in Palestine, not even the oppression from the Israeli military can deter them from getting to their place of learning. But, it won’t go unnoticed. The effects of such appalling and degrading harassment will slowly wear down on the minds of these bright school kids. Sadly, as the children of Palestine are exposed to never ending violence and oppression, much of the world sits patiently watching the inhumanity of the apartheid regime, as if a greater reason exists to bring an end to this tyranny than the safety of the children’s lives.