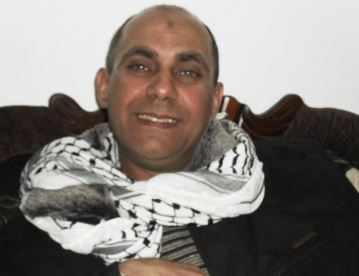 A group of unknown gunmen assassinated, on Wednesday afternoon, a former political prisoner and a senior security leader, in Sielet al-Harethiyya town, south of the northern West Bank city of Jenin.Ali Zakarna, spokesperson of the Palestinian political factions in the Palestine Liberation Organization (PLO), said Brigadier Ayman Jaradat, 40, was shot and seriously injured, and died from his wounds in the Jenin governmental hospital.

Jaradat was shot during celebrations welcoming Emad Zyoud, who was released from an Israeli detention center.

Zakarna said that Jaradat was repeatedly kidnapped and imprisoned by Israel, and that he was sentenced to several life terms, and was released under the Shalit Prison Swap Agreement, after spending 23 years in prison.

Following his death, the Palestinian Authority deployed hundreds of security officers in the town, in an attempt to prevent retaliatory attacks, or any incident that could lead to additional confrontations, and casualties.

Palestinian Police spokesperson Luay Erzeiqat said the police initiated an investigation into the incident, and that the police, and security forces, will ensure calm in Jenin.

It is worth mentioning that the Fateh movement of President Mahmoud Abbas issued a statement vowing retaliation.

It added that Jaradat was a member of the ‘Black Panther’ resistance group in Jenin, and that the Al-Aqsa Brigades, the armed wing of the movement, “will avenge his murder.”

Initial investigation revealed that Jaradat might have been killed in connection with the death of a Palestinian, who was a collaborator with Israel, and was killed in the First Palestinian Intifada of 1987.

Zakarna said that the shooter is known, and that he managed to escape with the help of some of his relatives.

On its part, the Palestinian Prisoners Society (PPS) issued a statement strongly denouncing Jaradat’s assassination, and said that he was a well-known figure and a prominent leader, including when he was imprisoned by Israel.