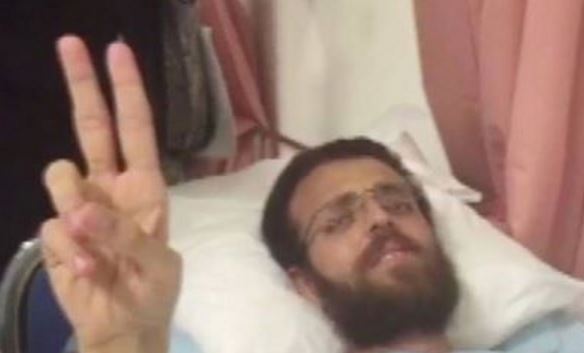 The Palestinian Prisoners’ Society (PPS) has reported that hunger striking journalist Mohammad al-Qeeq, who is held by Israel without charges or trial, has suspended his strike that lasted for 94 days, after reaching an agreement for his release, in May.Lawyers Hanan al-Khatib and Hiba Masalha, of the Palestinian Detainees’ Committee, said al-Qeeq has officially suspended his hunger strike, on Friday 26, in a statement made in front of his family and Arab political leaders, including lawyers, Arab Members of Knesset and members the Detainees’ Parents Committee.

The PPS said the agreement is an official declaration of ending his strike, in exchange for his release on May 21, 2015, and that he will continue to receive medical treatment in Israeli hospitals until his release.

Head of the Detainees’ Committee Issa Qaraqe said al-Qeeq’s will, and determination, overcame Israel’s policies of death, and that he managed to challenge Israel’s illegal Administrative Detention policies, that enable Israel to hold hundreds of Palestinians indefinitely captive, without charges.

Qaraqe’ thanked the Palestinians, their institutions and all Palestine solidarity activists around the world, for their support. He also thanked all lawyers involved with al-Qeeq’s case and the fight for his release.