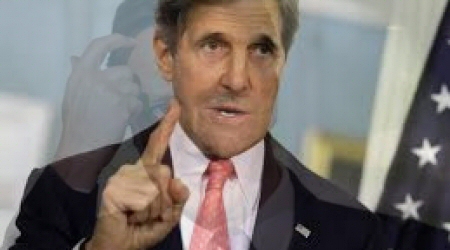 Secretary of State John Kerry, on Wednesday, urged Israeli and Palestinian officials to resume a “genuine” peace process, stressing that continued settlement construction is not helpful.According to World Bulletin/Al Ray, the top diplomat warned of a “downward spiral” in violence in the absence of an active process.

In order to dampen the uptick in violence, Kerry said it was imperative to have a process that people “can grab onto and understand with respect to the creation of a state.”

“If that can happen, then I think it’s possible to have progress, but you know, it’s not in our hands,” he told a congressional committee, acknowledging difficulties in gaining momentum on all sides of the conflict. ‘I don’t think that the situation is helped by additional settlement construction and building,’ he added.

The British prime minister was speaking during a parliamentary question period in response to a query from opposition Labor MP Imran Hussain, who asked: ‘Does the prime minister agree with me that illegal settlements and constructions are a major roadblock that hinder peaceful negotiations?’

Cameron replied: “I am well-known as being a strong friend of Israel, but I have to say the first time I visited Jerusalem and had a proper tour around that wonderful city and saw what has happened with the effective encirclement of occupied East Jerusalem it is genuinely shocking.’

He stressed that British government is a supporter of Israel, but it does not support the illegal settlements. He explained that they do not support what is happening in east Jerusalem and that it is very important to maintain Jerusalem in the way it was in the past.

Haaterz reported that senior Israeli officials noted that his criticism may have been meant to balance his government’s recent decision against boycotts of Israel.

The UK has been reported to give over £6billion to Israel, annually, in aid, and a similar amount in arms — over twice the official figure attributed to the US.