Frozen in Their Grief: On the Bereavement of Palestinian Families 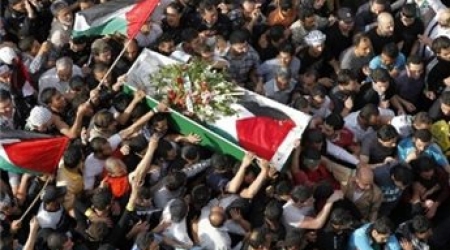 While the world was celebrating New Year’s Eve, in 2015, with all of its promise for the coming year, dozens of Palestinian families were receiving the frozen bodies of their Shaheeds (martyrs): children killed by Israelis in the recent political upheaval.Let me state at the outset that this article is an attempt to explore the experience of grief among victims of our political reality- not an essay on the meaning of martyrdom or an analysis of the label “Shaheed”, a status which both secular and religious Palestinians give to children killed by the occupation.

I simply make the observation that the Palestinian community, like many groups who glorify soldiers who die on their behalf, glorifies the individuals who have been killed resisting the occupation and use the term “Shaheed” to draw attention to the circumstances of their death.

Much silence surrounds the grief of the families of Palestinian fighters. The Palestinians perceive the Israeli authorities as taking sadistic satisfaction in our suffering. In response, the Palestinians often present a tough exterior, masking their emotions and effacing all signs of vulnerability in the face of those who killed their loved ones. Some Palestinians go further, trying to avoid inflicting further pain on their family members by holding their grief to themselves.

A young woman came to see me for palpitations and shortness of breath, symptoms for which no organic cause was found. When I inquired when her symptoms began, she replied: “Since my brother’s heart stopped beating.” Her brother had been shot in a demonstration two years previously; she had been holding this loss bound up in her chest for fear that her entire household would collapse if anyone acknowledged it out loud.

Other motives for Palestinian silence are the wish to avoid incriminating those who have been killed and the need to prevent further intimidation of supportive and sympathetic individuals in the community. To show solidarity with bereaved families means taking risks and bearing consequences. Even Arab members of the Israeli Knesset, legislators who paid visits to suffering families making appeals to receive the bodies of their children for proper burial, were threatened and punished.

Israeli Prime Minister Benjamin Netanyahu asserted: “Those who comfort terrorists’ families don’t deserve to be Knesset members.” The participation of these Arab members in the Knesset was suspended, while no measures whatsoever were taken against the Israeli justice minister who comforted the families of settlers accused of burning a Palestinian family.

Intimidation eliminates expressions of community support to families who are already suffering from impediments to the natural grieving process. Treated as suspects by the occupation, family members are often detained, punished collectively by home demolition, denial of work permits and interference in the performance of traditional rituals of mourning through the insistence that the body of the deceased will not be released until the family capitulates to the demand to bury its dead in isolation from the community.

After four months of exhausting negotiations between the Israeli authorities and the family of Ahmad Abu Sha’aban, the dead body of the son, Ahmad, was released to the family on the condition that the burial take place within one and a half hours, with the presence of no more than 14 persons and in the middle of the night.

We too, as Palestinians, are sometimes guilty of keeping these families locked in their pain. A survey taken by the Al-Quds Center for Israeli and Palestinians Studies demonstrated that 66 per cent of Palestinians expressed discomfort with the descent of media personnel onto grieving families, especially during the initial hours following a death.

Additionally, 60 per cent of people expressed dissatisfaction with the conduct of the political factions, in particular with claims that their sons belonged to a political party, distributing posters of the shaheed displaying the icon of the political party, and hoisting the political party’s flag at the funeral. Political fractions in this way have hijacked the sacrifices of individuals and the anguish of their families. The media has competed to report on the latest crisis in a manner that often intrudes on a family’s most private moments, turning a grieving father or mother into an institutional spokesperson.

A well-intentioned social pressure on a grieving family to express pride is another factor that may operate to inhibit the experience of pain and delay the grieving process. We observe families taking comfort in the size of the crowd who come forward to stand by them in its time of need, describing the last time they saw the shaheed and enumerating his various virtues. His friends take on the fantasy roles of son to the mother or of father to his children; the deceased is suddenly their dearest and closest friend. Soon these mourners flock to a newer crisis that claims their attention, leaving the family alone to face the void.

Circles of mourning displaying a “survivor syndrome” of guilt, shame, anxiety and sorrow seem to involve one person after another. We see a few cases in which youthful friends or relatives of the shaheed actually have attacked Israeli soldiers; this is an act driven by grief, among other things. In this way, the shaheed is romanticized and imitated. His funeral leads to other funerals.

The absent shaheed remains very present in the psyche of his mourners. An introverted middle aged man told me: “I am careful not to offend the image of my father. I am growing older now than he was when he was killed. I myself just got married and my wife became pregnant – and in fact, my father was assassinated right after he impregnated my mother with me. But I still live every day and every minute of my life with his image watching me, correcting my behavior and telling me what to do.”

Confiscating the bodies of dead Palestinians and imposing painful restrictions on the grief of their families has nothing to do with Israeli security, it only goes to benefit the wicked goal of imposing suffering for its own sake: punishing the Palestinian community through the deprivation of participating in the normal process of mourning. The consequences are widening circles of pain. For the families themselves, their inhibited and complicated grief creates cognitive distortions and the infusion of guilt, imposing on them the Israeli definition of the deceased as a criminal or terrorist. But for every family in Palestine, the death of these young fighters and the brutalization of the survivors are powerful weapons that undermine the psychological security of all.

Regardless of the judgment we pass on their specific actions, these young fighters were caught between the violence of the occupier and the helplessness of the Palestinian leadership. These young fighters acted with selflessness, seeking neither personal gain nor fame. They acted out the anger and the frustration experienced by all Palestinians. Their impulse was to offer help in the only way they thought possible. Their experiences, their emotions, and their intentions must be identified, understood and validated before debate on their actions can have legitimacy.

After all, it is the sacrifice of the few that nurtures the hope of liberation. Their families and the whole of the Palestinian community must acknowledge the enormity of the loss of our children, restore our positive memories of them, and retell the story of their death. Through this, we must affirm our deep love for those who died in the name of Palestine. At the very least, a process of Palestinian national remembrance can mitigate the isolation of grieving families and transform their personal loss into an experience of collective meaning.