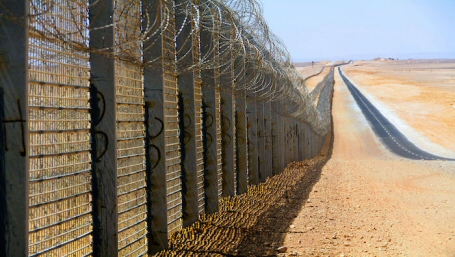 ‘In the state of Israel as I see it, there’ll be a fence around all of it. We’re surrounded by predators and we need to protect ourselves,’ Netanyahu said at the construction site of the upcoming wall.

“Ghetto,” a play written by Israeli playwright Joshua Sobol, premièred at the Haifa Municipal Theatre in Israel and the Freie Volksbühne, Berlin, in 1984. It is about the experiences of the Jews in the Vilna Ghetto during the Nazi occupation of Germany. Only several hundred people survived Vilna Ghetto’s short two years of existence. Starvation, disease, street executions, and deportations to concentration and extermination camps decimated its 40,000 population. Its few survivors hid in the surrounding forests where Soviet partisans and sympathetic villagers provided help.

Sobol’s play depicts Jews living in a ghetto controlled by Jewish police and Jewish councils working with the occupier. The play includes historical figures like Jacob Gens, the chief of the Jewish Police, who collaborated with the Nazis and later was appointed as the head of the ghetto’s Jewish Council. In the play, it is clear that Jews in the Vilna Ghetto lived a hard life, separated from non-Jews and unable to avoid collaborators. In exploring this reality, the play brings up the moral question of collaboration and assisting your occupier.

Sobol’s isolationist reconstruction of Vilna Ghetto is rooted in the Zionist narrative of “a people who live apart.” The perspective that Jews have always been treated as at least separate from, if not in opposition to, non-Jewish society echoes Balaam’s prophecies anticipating Netanyahu’s hidden desire: to be the builder of the last Jewish Ghetto.

In addressing the issue of Jewish ghettos, Sobol’s play is also in dialogue with the first ghetto: the Ghetto of Venice, as explored by William Shakespeare in “the Merchant of Venice.”

The Ghetto of Venice was instituted in 1516. Jews had to live in the confines of the ghetto under the Venetian Republic. Frankfurt, Rome and Prague adopted the Venetian example of the Jewish ghetto, and in height of the Nazi barbarism, these ghettoes were rebuilt and subsequently wiped out. The structures that remain stand as memories of atrocity, but also examples of resilience, resistance and the victory of the human spirit over the worst brutalities.

After shifting from its Venetian articulation to the now widespread Italian version of the term, “ghetto,” the word became understood throughout the world to refer to areas of Jewish seclusion as well as the insidious combination of social segregation and political persecution.

In these plays, Shakespeare and Sobol deal with a most difficult question: that of collaborators. Both authors do not represent treason as an individual attitude or a factor of one’s character, but as a social phenomenon to be dealt with.

Roman Polanski’s 2002 film ‘the Pianist,’ also takes us back to the Jewish ghetto, but in a depolitized fashion. In the film, beauty and pain mix into a sadistic relationship between two men, where passionate sounds of the piano become a guaranty for survival and ultimately exceed the terms of collaboration.

The historical drama is based on the autobiography of the Polish-Jewish pianist and composer, Władysław Szpilman. After going to Berlin to play piano, Szpilman returned to Warsaw in 1933, where he had previously studied at the Chopin Academy of Music. In Warsaw, he became a celebrated pianist and composer of both classical and popular music. In 1935, he joined the Polish Radio to work as a pianist.

Subsequently, Szpilman stayed in the Warsaw ghetto as a laborer and helped smuggle in weapons for the Jewish resistance. Later, he escaped the ghetto and survived in “Aryan” Warsaw with the help of past colleagues from the Polish Radio as well as fellow musicians. In other words: Szpilman survived thanks to human solidarity – thanks to people who risked their lives to give him the opportunity to survive in the hostile environment of occupation.

In this sense, the depoliticized but somewhat sadistic relationship between Szpilman and the Germans he lived with harbors a human story of solidarity – one that is deeply political and that stands radically opposed to the fundamentals of Zionism. Szpilman’s choice to remain in Poland, which is the graveyard of his family but also a source of solidarity that gave him life, stands in profound tension with morals espoused by Zionism – that is, that the Jew is alienated, alone in the world, unable to rely on or relate to non-Jews, and thus forever yearning for a Zionist state.

The Israeli government has built large ghettos by lining the West Bank, the border with Egypt, and the Gaza Strip with fences and walls. Of course, Gaza is the most complete Israeli “ghetto.” The vast majority of Jews somehow fail to connect the situation of Gazans, and all other Palestinians living under Israeli occupation, to their own history of resistance and survival under occupation. This elision has created a twisted drama where Palestinians are sentenced to a Jewish fate.

However, the walls and fences also built another ghetto: Israel. Israeli society, with its fences and coldness has, for the most part, created its own isolation. And Netanyahu’s recent vision to complete this ghetto signals both his own and the Israeli public’s ongoing support of the ghettoization of Israel.

The Arab East never saw the walls of a ghetto before and hopefully will never see them again, once we awake from the nightmare of Netanyahu. The Jews of Palestine, along the Jews of Syria, Iraq and Morocco are a part of our Arab heritage and our Arab future.

May the songs of resistance sung by Vilna partisans continue to be sung and to remind us to declare: never say this is my last path.