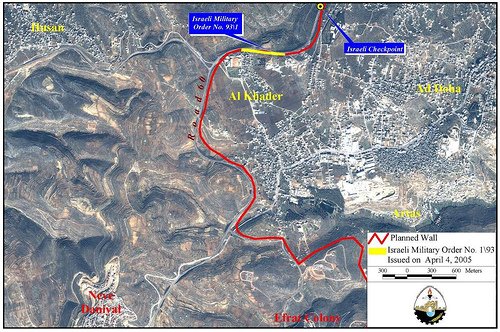 On Sunday, Israeli forces invaded the village of al-Khader, south of Bethlehem, and began firing live ammunition randomly throughout the village, according to local sources. Two Palestinians were critically wounded: a middle-aged dentist and a 16-year old boy.The dentist who was shot, Hisham Mohammad Atwan Sbeih, was sitting in his car preparing to pull out of the driveway of his home, when he was hit by an Israeli bullet in the chest. He was taken to the Beit Jala hospital in critical condition.

In addition, a sixteen-year old boy, Yazan Omar Salah, was shot in the chest in the main street of al-Khader village when a group of youth confronted the soldiers who were invading their town. He was taken to the local hospital al-Yamamah.

Al-Khader has been the site of numerous Israeli invasions in recent years, as Israeli authorities move ahead with plans to divide village land to construct the illegal Annexation Wall through the town.

Israeli authorities did not give a reason for their invasion of the village on Sunday, and did not issue any statement on the shooting of the two Palestinians.

Local sources reported that Israeli troops stopped an ambulance that was on its way to al-Yamamah hospital, apparently searching for the 16-year old Yazan Salah, but he was not in the ambulance that they searched.

In addition, troops surrounded the hospital for a brief period, then retreated without invading the hospital.

Over the past two years, Israeli forces have repeatedly invaded hospitals, including using undercover troops disguised as patients in distress, in order to abduct and assassinate Palestinians they claim are ‘wanted’.