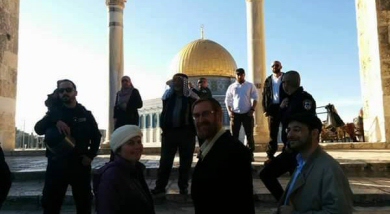 Israeli right-winger Yehuda Glick, head of the ‘Temple Mount Faithful’ group, was escorted – together with other settlers – under Israeli armed protection into the Al-Aqsa Mosque compound, in Jerusalem, days after an Israeli court lifted an order barring him entry to the Islamic holy site.A statement by Al-Aqsa Foundation for Endowment and Heritage said that the American-born rabbi and Israeli settlers stormed the compound entering through Al-Magharbeh gate, provocatively toured the yard and performed their Talmudic rituals.

“When an extremist like Glick storms Al-Aqsa Mosque, this stirs up troubles and provokes Muslims. We hold the Israeli police responsible for that,” the director of the compound, Sheikh Omaal-Kiswani said.

“One year, four months and a few days ago, after an assassination attempt against me, while I was still in a life-threatening, critical condition, [my wife] Yafi said in an interview (which became the [Yedioth] magazine’s front page) ‘Yehuda and I Shall Ascend the Temple Mount Again.’ Today, with a heart filled with gratitude, we fulfilled it.”

Last week, a Jerusalem court acquitted Glick of assault charges and removed the ban against his going to the Temple Mount, where he works as “tour guide”.

The prosecution indicted him for pushing a Muslim woman on the ground at the Al-Aqsa compound, breaking her hand.

The case fell apart when the prosecution suspected that the 67-year-old Palestinian Ziva Badarna’s testimony was fake.

According to Haaretz, Glick was barred from entering the Al-Aqsa compound after a Jerusalem District Court Judge said that his presence there was “inflammatory,” particularly since he was accused of assaulting a woman during one of his visits there.

The judge commented that “there is a risk of violence breaking out if the defendent returns to the compound before the end of legal proceedings in his case.”

Despite the court ban, Glick was escorted inside the compound by Israeli guards a handful of times last year.

In 2014, he survived an attempt on his life by a gunman in a drive-by shooting in Jerusalem.

He was seriously wounded in the incident. A Palestinian man suspected of being behind the shooting was killed in shootout with with Israeli police a day later.

The Dome of the Rock — located in the Al-Aqsa Mosque compound — is the third holiest site in Islam.

At the same time, it is venerated as Judaism’s most holy place, as it sits where Jews believe the First and Second Temples once stood.