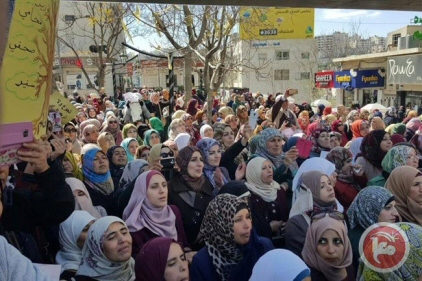 Palestinian teachers organised sit-in protests across the occupied West Bank on Tuesday, as a teachers strike calling on the Palestinian Authority to guarantee their rights entered its 16th consecutive day.The demonstrations came as the Palestinian government threatened to take administrative and legal procedures against teachers if they did not commit to returning to work on Wednesday.

During the government weekly meeting, Palestinian Prime Minister Rami Hamdallah said that the government had a ‘responsibility’ for students’ future and needed to push to solve the conflict with the teachers, as most schools across the West Bank have been shut down because of the strike.
The government called upon the Minister of Education to extend the current school year in public schools to make up for the closures.

The government’s latest initiative included paying teachers a 2.5 percent raise that would be applicable to January salaries onward.

Teachers said that PA security forces set up a number of checkpoints across the West Bank to prevent them from reaching demonstration sites.

‘I was travelling to Hebron to take part in a sit-in strike outside the Hebron’s governor’s office, and Palestinian security denied me entry,’ a teacher, who requested anonymity, told Ma’an News Agency.

PA security sources said that the checkpoints around the southern city were ‘not to deny teachers entry to Hebron,’ but there to ‘ambush fugitives.’ They said at least one drug dealer was arrested at the checkpoints.

Despite the restrictions, hundreds of teachers held a sit-in protest at the Ibn Rushd circle in Hebron, bearing signs demanding for their rights.

Hundreds of teachers also protested in front of the Directorate of Education in Tulkarem.
In Nablus, hundreds took part in a sit-in at the al-Shuhada circle. A representative for teachers in Nablus, Khalifeh al-Khatib, told Ma’an that efforts to end the strike had so far failed to satisfy the teachers’ demands.

Khatib added that their stipulations were clear and any initiative must first and foremost guarantee the dignity of teachers.

One teacher attending a protest in Hebron said that he was on strike — which he noted was his right according to the basic law — because his salary was only 3,900 shekels ($1,000) per month, including transportation costs, despite having worked as a teacher for 23 years.

‘I thank the prime minister for being generous enough to offer a 4,747 shekel ($1,218) salary to a 20-year employee of the Ministry of Education,’ he said. ‘Give me this salary and I would go back to my job starting tomorrow.’

A 2013 agreement between the Palestinian teachers’ union and the PA guaranteed a significant increase on teachers’ basic salary. However, three years after a lengthy teachers’ strike over unpaid salaries, the PA has yet to make good on its promise to increase wages.

Last month, an estimated 20,000 Palestinian teachers demonstrated in Ramallah to call for the implementation of the 2013 agreement.

The heads of the Palestinian Teachers’ Union submitted their resignation in late February after a deal they struck with the PA to end the national strike was widely rejected by teachers.

A week later, on Feb. 23, PA security forces set up checkpoints outside major West Bank cities to prevent public school teachers from attending a major demonstration in Ramallah, with witnesses reporting that bus and taxi drivers were threatened with having their licenses revoked if they transported teachers to the protest.