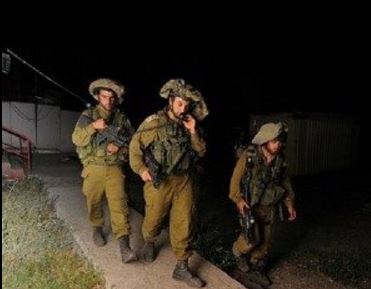 The soldiers violently searched their homes, causing excessive property damage, and interrogated their families, in addition to installing a roadblock on the southern entrance of the town, and searching olive orchards in the area while firing flares.

In addition, the soldiers invaded the Qabatia town, south of Jenin, searched homes and kidnapped one Palestinian, identified as Nasser Mohammad Freij, 21.

The army also invaded the northern West Bank city of Nablus, searched many homes, and a tailor shop belonging to members of Ayyad family, before confiscating several machines and furniture, and kidnapped two young men, identified as Mahmoud Anabtawi and Firas ash-Shayeb.

The army also kidnapped four young Palestinian men in the West Bank district of Bethlehem, after stopping them on sudden military roadblocks.

In Hebron, in the southern part of the West Bank, the soldiers installed a military roadblock on the main road leading to the al-Markaz village, south of the city, and searched dozens of cars while examining the ID cards of the passengers.

The soldiers also kidnapped seven Palestinians, after violently breaking into their homes and searching them.

In occupied Jerusalem, the soldiers invaded Anata town, east of the city, and kidnapped Ahmad Hasan Hilwa and his son Abdullah.