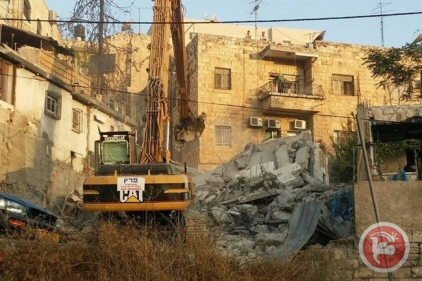 A wave of mass Israeli demolitions continued on Wednesday, in the occupied West Bank and Jerusalem, among them a house under construction in Shuwekeh, on the outskirts of Tulkarem, according to local sources.Witnesses said Israeli troops accompanied by a bulldozer broke into Shuwekeh and demolished the house of Khalil Ali, a local Palestinian, which is currently under construction, under the pretext of construction without an Israeli permit.

One of the relatives of Ali told WAFA the latter had received a notification from the Israeli army to stop the construction of his home about two years ago.

Local Palestinians also informed WAFA that in the past few months, several Palestinians in the outskirt received notifications regarding Israel’s intention to demolish their homes during construction.

Israeli rarely issues construction permits to Palestinians in Area C of the West Bank, under complete Israeli control, forcing many of them to embark on construction without a permit to shelter their families.

The Israeli Committee against House Demolitions (ICAHD) explains in a special report that “in almost all cases Palestinians have no choice but to build ‘illegally’, as permits are almost impossible to obtain.”

In the hamlet of Khirbet Tana, northeast of Nablus, Israeli forces demolished ‘dozens’ of structures, including houses, barns, and the hamlet’s sole school, a local official told Ma’an.

Munadil Hanani, a member of the local committee of Beit Furik near Nablus, said that Israeli bulldozers under Israeli army escort had stormed Khirbet Tana on Beit Furik’s outskirts and demolished every structure there.

He said it had been equipped with state-of-the-art facilities, and had been attended by 26 local children from grades one to four.

Hanani said Israeli forces also demolished residential homes, dozens of sheep barns, and a number of other agricultural structures in the hamlet. He said that the homes were mostly built from tin, plastic, wood, and stone.

He added that Khirbet Tana’s population is around 275. The only structure left untouched was an ancient shrine which serves as a mosque for the hamlet’s residents.

Last month, Israeli rights group B’Tselem warned of a ‘new wave’ of Israeli home demolitions in the occupied Palestinian territory, saying the Israeli authorities appeared to ‘have stepped up efforts to expel Palestinian communities from vast areas in the West Bank.’

Israel almost never gives Palestinians legal permission to build in land classified as Area C, and B’Tselem said ‘residents have no choice but to build their homes without permits and live in constant fear of their homes and livelihoods being destroyed.

‘Effectively, the state forces people to subsist in inhuman living conditions, without basic amenities and with no hope or chance for improving the situation.’

The rights group went on to say that Israel’s home demolitions were aimed at the displacement of Palestinians from Area C, and ‘reflects de-facto Israeli annexation of Area C.’

It added: ‘Despite significant international attention to this reality, to date, no effective measures have been taken to put an end to it, which effectively means the international community is greenlighting continued human rights violations and the forcible transfer of civilians inside the occupied territory.’

Meanwhile, in annexed East Jerusalem, in the neighborhood of al-Tur (Mount of Olives), Israeli forces demolished a three-story building under construction.

Witnesses said that, early on Wednesday, Israeli forces escorted bulldozers into al-Tur, where they surrounded the building and closed all roads leading toward it.

They reportedly tore down the building without telling its owners or giving any advance warning.
The building consisted of three stories, each comprising two apartments.

The Wadi Hilweh Information Center in Silwan said, in its monthly report for February, that Israeli authorities appeared to be escalating home demolitions in East Jerusalem.

It said that in February, Israeli bulldozers had torn down 16 structures there, including three apartments under construction, parts of two houses, two barns, four tin shacks, three walls, a parking lot, and a garage.

Some 579 homes have been destroyed in East Jerusalem over the last twelve years, leaving 2,133 Palestinians homeless in total, according to Israeli rights group B’Tselem.

Israeli government policies make it nearly impossible for Palestinian residents of Jerusalem to obtain building permits, according to the Association for Civil Rights in Israel.