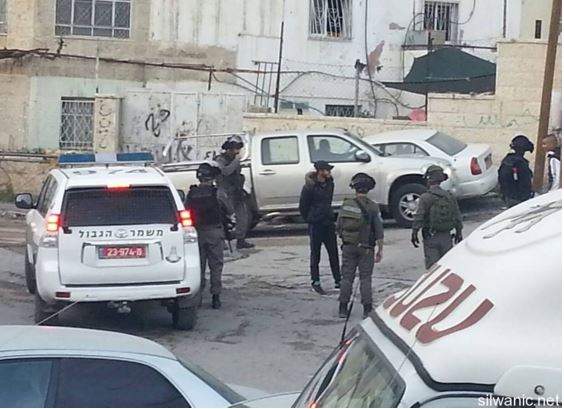 Dozens of Israeli soldiers surrounded, on Thursday, the towns of al-‘Isawiyya and Silwan, in occupied Jerusalem, and invaded them before firing many gas bombs, and rubber-coated steel bullets. The soldiers also broke into many homes and stores.
Mohammad Abu al-Hummus, a member of the Follow-Up Committee in Silwan, said dozens of soldiers surrounded the town, approximately at three in the afternoon, and prevented the Palestinians from entering or leaving it, in addition to searching dozens of cars and interrogated many Palestinians while inspecting their ID cards.

Abu al-Hummus added that many armored military vehicles also invaded the town, before the soldiers stormed and searched many homes, and residential building, and occupied many rooftops.

He also said clashes took place in the town, after many local youths hurled stones, empty bottles and Molotov cocktails on the invading vehicles, causing an army jeep to partially burn while the army fired several rounds of live ammunition.

The soldiers also invaded the al-‘Isawiyya town, and kidnapped two young men from their homes, after searching them. The two have been identified as Younis ‘Oleyyan and Ali Mheisin.

The soldiers, and personnel of the City Council in additional to the Natural Reserve Authority, invaded Palestinian lands that have been recently bulldozed and uprooted, in addition to buildings that were previously demolished, and took pictures of them, in addition to confiscating a tent.

The soldiers also photographed the bulldozed and uprooted Palestinian, as Israel wants to confiscate them from their owners, in order to build the so-called “National Gardens.”

In Silwan town, south of the Al-Aqsa Mosque in Jerusalem, the soldiers invaded several neighborhoods and removed posters and Palestinian flags that were placed to welcome a political prisoner after his release.

The soldiers also attacked many young men and children in the town and forced them out of the area.

On Thursday evening, the soldiers invaded Be’er Ayyoub and Ein al-Louza neighborhoods in Silwan, and searched many homes and alleys, allegedly looking for youths who hurled stones on them.

The soldiers also invaded stores and shops, and ordered the owners to present their licenses and permits, and threatened to impose very high fines on merchants who have any missing documents.