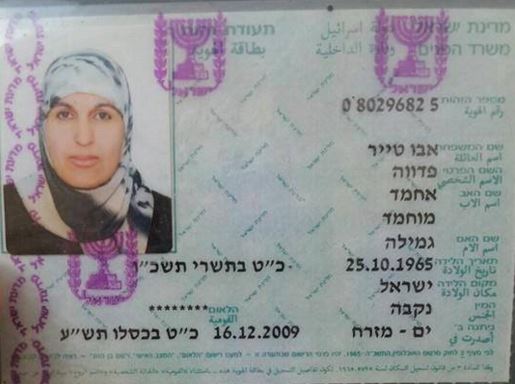 Israeli soldiers killed, Tuesday, a Palestinian woman in Jerusalem’s Old City after the army alleged her “attempted to stab soldiers.” The soldiers prevented Palestinian medics from approaching the seriously injured woman, who died of her wounds.

The woman, Fadwa Ahmad Mohammad Abu Teir, 50, from Um Touba village south of occupied Jerusalem, was killed in the al-Wad Street, in the Old City. Abu Teir is a married mother of five children, three boys and two girls.

Israeli sources claimed that the woman “pulled a knife and attempted to stab a soldier,” before the army “neutralized her,” according to the Israeli military terminology used to refer to killing, or disabling Palestinians. The woman was later moved to an Israeli hospital where she died of her serious wounds.

A Palestinian physician said the soldiers closed the area, and prevented Palestinian medics and doctors from even approaching the seriously wounded woman, and left her bleeding.

“I was trying to reach the wounded woman, the medics and I spent around 7 to 10 minutes, arguing with the soldiers, pleading with them to allow us to reach her,” the doctor said, “when we were finally able to reach her, she had no pulse; she was shot in her right eye, in addition to two gunshot wounds in her abdomen.”

“We tried CPR; we tried everything we could, but she was very seriously injured,” he added, “Israeli medics later arrived, removed us, and took the wounded woman away, without providing her with any aid, or even check whether she was still alive or not.”