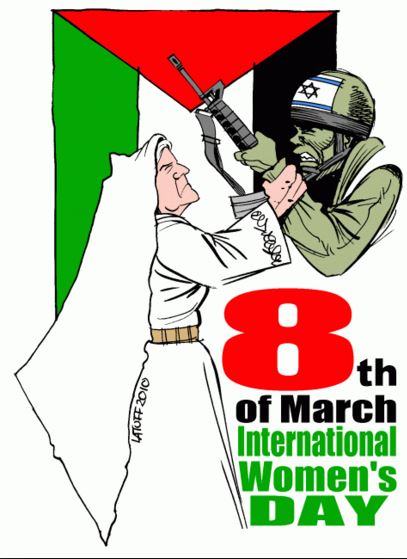 On International Women’s Day, All Efforts Must Be United to Offer Protection and Justice for Palestinian Women.On the 8th of March, the world celebrates the International Women’s Day, which is one of the most important occasions to highlight the significance of women’s enjoyment of their rights under the relevant international standards and conventions and to support the women’s struggle for the sake of justice, equality and elimination of discrimination in all fields.

On the other hand, Palestinian women suffer due to the consequences of domestic violence practiced against them in the Palestinian community.

The occupied Palestinian territory (oPt) witnessed in the past months an escalation of Israeli crimes that did not exclude women. Moreover, Israeli forces continued to used lethal force, particularly in the West Bank.

The Palestinian Center for Human Rights (PCHR) documented crimes of willful killing against Palestinians civilians, including girls and women, under the pretext of alleged stabbing attacks without even posing any threats to the lives of Israeli soldiers, which means summarily execution against women and girls.

According to PCHR’s documentation in 2015, 5 women were killed and 12 others were wounded due to Israeli occupation practices in the Gaza Strip and West Bank.

On this Occasion, Palestinian women in the Gaza Strip have been suffering due to the consequences of the continued closure policy that has been imposed for over 9 years, in which their living and economic conditions have aggravated.

In addition, the suffering of Palestinian women in the Gaza Strip increased because of the consequences of the 2014 Israeli offensive on the Gaza Strip, as hundreds of families are still experiencing harsh conditions due to the delay of the Gaza Strip reconstruction process, which is considered as a flagrant violation of human rights and the international humanitarian law.

On the domestic level, the oPt witnessed in 2015 more killing crimes against women on different grounds. As a result, 8 women were killed, 2 of whom were killed on grounds of the so-called ‘family honor’.

On this occasion, PCHR stresses its absolute support for Palestinian women, who have experienced exceptional circumstances, and:

1. Calls for offering protection to civilians, including women, and compelling the Israeli authorities to respect human rights and comply with the principles of the international humanitarian and human rights laws;

2. Calls for working on putting an end to the Israeli-imposed closure on the Gaza Strip and its consequences to allow the Gaza Strip population, including women, to enjoy their right to live in dignity;

3. Calls upon the Palestinian National Authority and unity government to take the necessary measures to put an end to domestic violence and prosecute those who commit crimes against women; and

4. Calls upon the Palestinian Government to fulfill its international obligations arising from the State of Palestine’s accession to the Convention on the Elimination of All Forms of Discrimination against Women.