Israeli forces, on Tuesday night, have kidnapped iconic activist against the apartheid wall and settlements, and mother of six, Manal Tamimi, aged 43, from her home in Al-Nabi Saleh village, near Ramallah.On International Women’s Day, 8th of March, at 1:30 AM, dozens of soldiers stormed Manal’s home, raided it and detained her family in one room, while female Israeli soldiers have taken Manal to another room in the house, thoroughly inspected her, then abducted her.

Manal’s husband, Bilal Tamimi, 50, said that, a few hours following the arrest, the family knew that Manal was taken to Benyamin Israeli police center near Ramallah, calling it “the Israeli gift to the Palestinian women on women’s day.”

Manal’s lawyer, Gabi Lasky, said, according to the PNN, that Tamimi underwent interrogation at the police center, and he has asked for a hearing session to take place as soon as possible, to know the charges held against her.

Manal and her family have maintained a high-profile in nonviolent popular resistance.

She was also part of Popular Struggle Coordination Committee, which presents community-based resistance rooted in a belief in the power of nonviolent struggle, taking various forms, such as strikes, protests, and legal campaigns, as well as supporting the call to Boycott, Divestment and Sanctions.

Amira said that this act displays the Israeli brutality against all values of freedom and democracy, and against all women, and Palestinian women in particular.

PSCC demanded all women’s associations and human rights organizations to expose Israeli crimes against women and focus on Manal’s case, at the moment.

Two close relatives from the family, Ahed and Wa’ad Al-Tamimi have repeatedly stood up for Israeli soldiers during demonstrations.

In September of 2015, a story about an Israeli soldier that attacked Mohammad Tamimi, brother of Ahed and Wa’ad, while his arm was broken and in a cast, went viral. Manal’s close relative, Nariman, and her daughters saved the child from the soldier and defended him.

For the past six years, the village of Al-Nabi Saleh held a peaceful demonstration every week, against the Israeli wall and settlements that are engorging the village.

Bilal Tamimi said that Manal was unable to participate in the demonstrations during the past three weeks, because she developed a bad allergy towards teargas, which was fired intensely during protests. 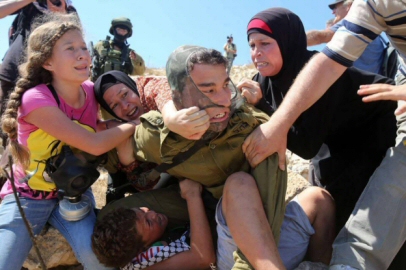