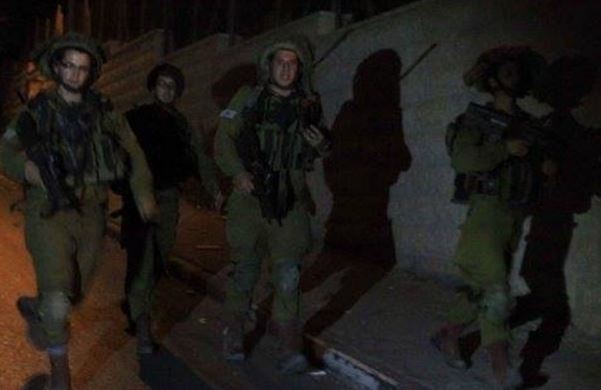 Israeli soldiers invaded, overnight and at dawn Wednesday, several Palestinian communities, in different parts of the occupied West Bank, searched and ransacked many homes, and kidnapped, at least, ten Palestinians. Media sources in Jenin, in the northern part of the occupied West Bank, has reported that the soldiers kidnapped one Palestinian identified as Moayyad Aref Eshteiwy, 58, after invading and searching his home.

The soldiers also invaded Barta’a village, isolated behind the Annexation Wall southwest of Jenin, before breaking into and searching many homes and a toy store, and kidnapped three brothers, identified as Raja, Younis and Ayed Qabaha.

The three brothers were taken prisoner from their toy store, after the soldiers invaded and searched it, and confiscated many toys.

In addition, the soldiers invaded Hijja village, east of the northern West Bank city of Qalqilia, and broke into the home of a href=’http://www.imemc.org/article/ 75199′ target=’_blank’>Bashar Masalha, who was killed on Tuesday, and interrogated his family.

The soldiers also shot and injured a young man in the Naqqar neighborhood, west of Qalqilia city, during clashes that took place after the army invaded it. He was shot in his arm and was moved to a local hospital.

In Tulkarem, in the northern part of the occupied West Bank, the soldiers invaded the home of a journalist, identified as Sami as-Sa’ey, who works for the al-Fajr al-Jadeed TV in the city, and kidnapped him.

Media sources said many Palestinians suffered the effects of tear gas inhalation, during clashes with the soldiers after several Israeli army vehicles invaded the refugee camp and searched many homes.