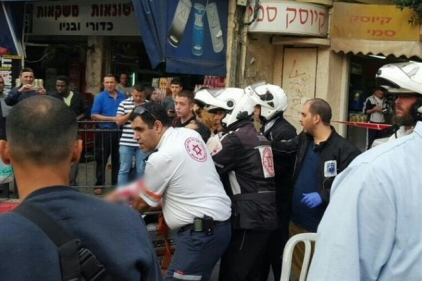 Three Palestinians were shot dead allegedly carrying out separate attacks in Israel and occupied East Jerusalem, killing one American tourist and wounding at least 12 Israelis, on Tuesday afternoon and evening.

In the first deadly encounter, shortly before 5 p.m., an Israeli police spokesperson said that a Palestinian man was shot dead after he allegedly stabbed and wounded an Israeli man near Petah Tikva, about seven miles east of Tel Aviv.

The wounded Israeli has been identified as Yonatan Ezriyahav, 39.

Israeli police forces reportedly arrived on the scene and killed the suspect on site, according to Maan News. It was added that Israeli forces closed the area for investigation.

In this video, an onlooker can be heard to shout: ‘Die, you fucker! Die, you fucker.. die, you son of a whore! Do not call for an ambulance, let him die!’

The Palestinian was later identified as Abdul-Rahman Raddad, aged 18, from al-Zawiya village, in the occupied West Bank district of Salfit.

He has been identified as Fuad Abu Qathaf Abdullah Abu Rajab, 21. He was shot and killed in the ensuing gun clashes.

His family said Israeli security officers has officially informed them, on Wednesday evening, that their son was killed and two officers were injured.

The soldiers also detained and interrogated Abu Rajab’s father, his uncle and his cousin, before allowing the father to see his son’s body. His mother will be interrogated, Wednesday.

Mohammad Abu al-Hummus, of the Follow-Up Committee in the al-‘Isawiyya town in Jerusalem, said dozens of soldiers surrounding the Tamimi home and fired many rubber-coated steel bullets and gas bombs on the residents, who gathered in the area.

He added that the soldiers photographed the interior and exterior of the Tamimi family home, and took measurements, a procedure the army conducts to prepare for demolishing homes.

A spokesperson for Hadassah Israeli Medical Center, in Jerusalem, later said both Israeli officers had been hit in the head. One of them, aged 47, was in critical condition, fighting for his life, while the other, 31, was in moderate condition.

Israeli online daily Haaretz said two border police officers were injured in the Jerusalem attack, and that one of them was wounded while exchanging fire with the Palestinian shooter, and the second during the pursuit that followed it.

Haaretz added that one officer, 49, suffered a serious injury, while the other, 31, suffered a moderate injury.

Shortly after 6 p.m., Israeli police reported a third attack near the port in Jaffa city, with a young Palestinian man shot dead after he stabbed an American tourist, 29, to death and wounded, at least, eleven Israelis.

The Palestinian was identified as 22-year-old Bashar Masalha from the village of al-Zawiya, in the Qalqilia district of occupied West Bank.

Israeli Ynet News said the American citizen was pronounced dead directly after arriving at the Wolfson Medical Center, in Holon, and that six wounded persons were moved to Icholov Medical Center, also in Holon.

One of the wounded is a pregnant woman who suffered a moderate injury, and two of the wounded were released after receiving treatment for minor wounds.

The Ynet News added that two wounded persons were moved to the Sheba Medical Center, in Tel HaShomer, and that one of them suffered a serious injury, two suffered moderate wounds and one was lightly injured.

Audio translation: ‘In the head, shoot him in the head, brother! All respect, you are a king! Like that! In the head!’ Then another voice can be heard: ‘If he is lying on the ground, why don’t you shoot him directly?’