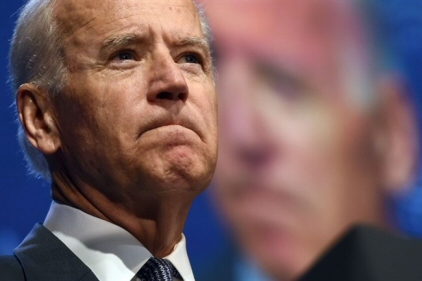 The vice president condemned the attacks — as well as the failure, by Palestinian leadership, to condemn the attacks — during a joint press conference, according to AP.

‘The kind of violence we saw yesterday, the failure to condemn it, the rhetoric that incites that violence, the retribution that it generates, has to stop,” Biden said, specifically targeting Palestinian President Mahmoud Abbas and the Fatah party, which he said ‘glorified’ Tuesday’s attacks, Ma’an further reports.

Slamming Palestinian leadership and its alleged incitement of Palestinian violence, Biden said that, while such violence must be stopped, doing so “cannot and will not be done just by physical force.”

The slight criticism echoed condemnations by international leaders and rights groups of Israel’s harsh reaction against Palestinian communities for attacks carried out by individuals, termed by many as collective punishment.

Israeli media reported that the PM canceled the trip, after the White House was unable to arrange a meeting between Obama and himself, allegations which the White House denied.

White House Press Secretary Jon Earnest, in a press briefing on Tuesday, denied that Netanyahu’s move was a “snub” to the US, referring to the incident as “simply a matter of scheduling.”

Earnest added that Biden’s visit was viewed as an opportunity for the vice president to strengthen relations between the US and Israel.

Earnest clarified that Biden did not intend to engage in negotiations over US military aid to Israel, a topic that has spurred controversy among the two parties, over recent months.

Despite Earnest’s comments, Israeli officials told Israeli daily Haaretz that Biden, on Wednesday, encouraged Netanyahu to sign a new deal for military aid while Obama was still in office.

After the terms of the aid agreement became unclear in February, Netanyahu said he would wait for the next US president to sign a deal, if the current administration was “unable to meet Israel’s security needs.”

Israel reportedly requested, according to Ma’an, at least $5 billion in annual military aid, from the US, that would be fixed for the ten years to follow, far surpassing the $3 billion per year currently received by Israel through a military aid agreement set to end by 2018.

While US-Israel relations have seen a series of diplomatic disputes over the past year, Israel remains the number one long-time recipient of US military aid, and VP Biden made clear, during his visit, that the US would continue to contribute to Israel’s “defense” needs.

Biden’s visit is his first to Israel since 2010, when Israel announced the construction of 1,600 homes for illegal Jewish-only settlements in annexed East Jerusalem.

Also of interest: 02/28/16 US to Increase Israeli Military Support