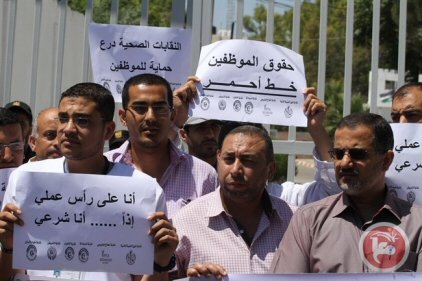 The Fateh High Leadership Committee in the Gaza Strip reportedly plans to submit its resignation to defacto Palestinian President and Fateh leader Mahmoud Abbas, a Fateh official in the besieged enclave said, Friday.The official told Ma’an News Agency that the committee has announced the potential for their collective resignation following their failure to foster a solution to an ongoing salary crisis in Gaza.

The salaries of tens of thousands of Palestinian workers in Gaza have been a major point of dispute between rival factions Fateh and Hamas since the two agreed to back the creation of a unity government, in June of 2014.

After Hamas took control of the Gaza Strip in 2007, some 70,000 Fateh-dominated Palestinian Authority employees in the blockaded territory stepped down from their posts, but continued receiving salaries from Ramallah.

Hamas, afterwards, struggled to regularly pay salaries to around 50,000 employees it hired to replace PA workers, and has repeatedly said that the PA has abandoned financial responsibilities in the besieged enclave, allegations the PA denies.

Following the establishment of the unity government in 2014, Hamas demanded that the government regulate the salaries of its 50,000 employees.

The unity government said the workers would only be hired ‘according to need,’ while they pledged to return the PA’s former employees to their positions.

Most of the Hamas employees have gone without pay for months, by some estimates receiving only 40 percent of what is owed to them.

There has been little prospect of a solution to the dispute, with a high-profile bid by the unity government to establish itself in Gaza, last summer, ending in complete disarray.