Israeli Soldiers Kidnap 15 Palestinians In The West Bank, Injure A Child In Gaza 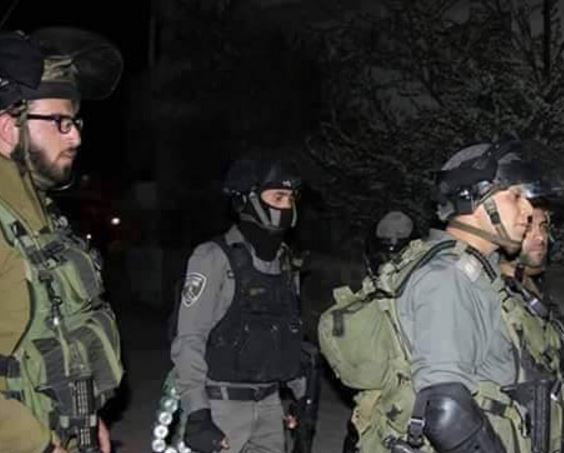 The PPS stated the soldiers invaded Doura town, south of Hebron, and kidnapped Khaled Mohammad al-Fasfous, 25, and Suleiman Faqqousa after confiscating his car.

Al-Fasfous is the brother of Mohammad, who is held by Israel under arbitrary Administrative Detention orders, without charges or trial, and declared a hunger strike on February 20th.

The PPS also stated that the soldiers invaded the Qalandia refugee camp, north of occupied Jerusalem, and kidnapped three Palestinians, identified as Rami Abdul-Hamid Hammouda, 34, Mohammad Khaled Shehada, 17, and Mahmoud Omar Zayed, 33, the brother of Bilal Zayed, 23, who was shot dead, along with two other Palestinians, by Israeli soldiers invading the refugee camp, on December 24, 2015.

Local sources said the soldiers surrounded the refugee camp, and invaded it from several directions, before storming and searching many homes.

In the West Bank district of Bethlehem, the soldiers searched homes and kidnapped three Palestinians.

The kidnapped residents have been identified as, the head of the Detainees’ Committee in Bethlehem, Mohammad Khalil Hameeda (Zaghoul), 40, from Beit Jala city, Mustafa Adel Asakra, 19, and Mohammad Atef al-Kamel, 22, from al-‘Asakra village in Bethlehem.

It is worth mentioning that Zaghoul is also an anchor with Radio Bethlehem 2000, where he hosts a show about the Palestinian political prisoners, held by Israel.

The soldiers also invaded Hindaza area, east of Bethlehem, and summoned Laith Suleiman Obeyyat, 21, for interrogation in the Gush Etzion military base, after searching his home.

In Nablus, in the northern part of the West Bank, the soldiers searched homes and kidnapped a young Palestinian, identified as Dia’ Akkoub.

In the northern West Bank district Jenin, the soldiers installed a roadblock on the main entrance of Qabatia town, south of Jenin city, and kidnapped a young man, identified as Abdullah Sabaghna.

In the Gaza Strip, a Palestinian child, 16 years of age, suffered a moderate injury, east of the Sheja’eyya neighborhood, east of Gaza city, after Israeli soldiers, stationed across the border fence, opened fire on him.

Eyewitnesses said the child was collecting stones, close to the al-Mintar (Karni) Crossing, to be recycled and used in constructions in the besieged coastal region.