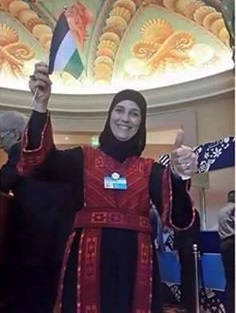 Pope Francis, the head of the Catholic Church, announced Sunday that Hanan al-Hroub, a teacher from the Deheishe refugee camp in Bethlehem, in the occupied West Bank, was awarded the Global Teacher’s Prize on Sunday.Al-Hroub was selected over 8,000 other competitors from all over the world. Her methods of teaching non-violence through games were highlighted during the selection process.

In a video showing the situation in Deheishe camp and the work of al-Hroub, she stated, “A child will mature quickly here, because the situation we live in here is different than the situation of any child around the world. My husband and children were shot at on their way home from school. My children saw their father injured, which shocked my children and shocked me.

“It transformed my children’s behaviors, personalities and academics. I felt that I was alone in getting my children through this. No teachers had helped us get our children back on track. We started inventing games at home …. I decided to help every child that goes through something like this.”

She also stated, “Violence acts as a barrier to us teachers which blocks us from performing our roles….We must teach our children that our only weapon is knowledge and education.”

Her methods involve teaching through teamwork, in games and activities that bring out each student’s strengths. Her colleagues point out that she connects with her students at a deep, heartfelt level, and shows them ways to play that are based in learning instead of reflecting the violence of the military occupation they live under.

The award was issued by the Valley Park Foundation. al-Hroub will receive $1 million to assist with the spread of her teaching methods to schools throughout the Occupied Palestinian Territories.

In her speech accepting the award, al-Hroub stated,’Teachers work hard to free the childrens’ minds from violence and turn it into dialogues of beauty.’

The appointed Palestinian Prime Minister of the Fateh party, Rami Hamdallah, stated in response to the award, “Teacher Hanan al-Hroub accomplished the impossible despite of all the obstacles put in front of every Palestinian by the Israeli occupation; she makes us proud.”

Video of Pope Francis announcing the winner of the award: