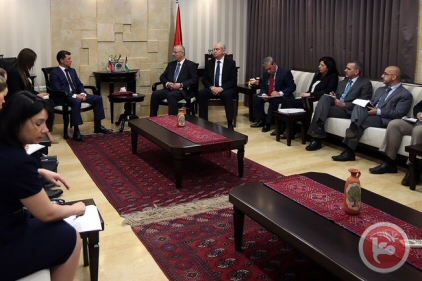 Palestinian Prime Minister Rami Hamdallah met, on Tuesday, with Russian Minister of Labor and Social Affairs Maxim Topolin, who is also the head of the joint Russian-Palestinian affairs committee, to discuss economic and political relations.Hamdallah commended the “strong” Russian-Palestinian relationship and expressed gratitude for the continued Russian support for different Palestinian sectors.

He added, according to Ma’an, that he hoped Russia would also support the French proposal for an Israeli-Palestinian peace conference.

Topolin and Hamdallah addressed the possibility of offering tax exemption to Palestinian products exported to Russia, with a particular focus on medical and agricultural products. They also reportedly discussed developing the Palestinian tourism sector in Palestine.

The Soviet Union first recognized the State of Palestine in 1988, and in 2011, then-President Dmitry Medvedev reconfirmed Russia’s support of the establishment of a Palestinian state.